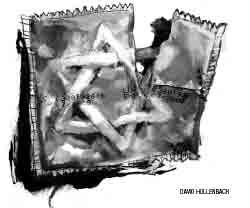 I took my goy Neshumeleh (Yiddish for “sweetheart”) to Yom Kippur services this year to fulfill his curiosity about this ancient religion that turns out these well-stacked, sex-positive Jewesses. He felt nervous about wearing the free yarmulke, but stuffed it in his pocket as a keepsake.

Premarital sex didn’t make the short list of sins worth repenting, at least not in the prayer books handed out at Kolot Chayeinu, a progressive Park Slope congregation. Deceit, jealousy, arrogance and even cynicism made the cut, but not sex.

This is because in all sects of Judaism, love and sex are integral to God’s commandment to be fruitful and multiply. Everything God creates is good, and God made sex, so therefore, sex, when done well, is divine.

As a Reform Jew, I kissed my first boy at a Jewish summer camp in West Virginia. I lost my virginity to a Jewish boy in a Jewish neighborhood. We would snicker that sex was even a double mitzvah (Hebrew for “good deed”) on the Sabbath. We conveniently dismissed the fact that it only counted as a mitzvah if you were married. I was not raised to think that sex was a sin, only that its appropriateness was tied to factors like age and the seriousness of your relationship.

More traditional interpretations of Jewish law hold that sex outside of hetero-wedlock is a no-no, punishable by God. Thankfully, currents in modern Jewish thought emphasize the quality of the relationship of the couple. The Jewish philosopher Martin Buber wrote in 1923 that the “I-Thou” relationship between people – direct, mutual and open – is necessary for the sexual urge to be exercised in a godly way. He suggests that unwed teens should be discouraged from having sex because they are more likely to be in impersonal and selfishly motivated “I-It” relationships.

Jews believe in personal choice and free will. Just like Adam in the garden, we must learn the consequences of our actions. This also explains the popularity of JDate, a website that helps you choose and schtup yids your Bubbeh would like. Acceptance or rejection of homosexuality in the Jewish faith depends on whether you believe homosexuality is a choice or a biological phenomenon.

The following biblical edict frames it as a choice, and therefore punishable. “A man that lies with a man as with a woman, shall be cut off [from society]” (Lev. 20,13). However, some Jews see it as a natural occurrence and therefore an act of God. At Kolot Chayeinu, a lesbian couple and their child lit the candles to begin the service, with the entire congregation celebrating a committed, loving and fruitful queer relationship.