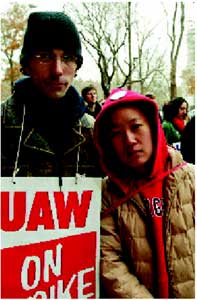 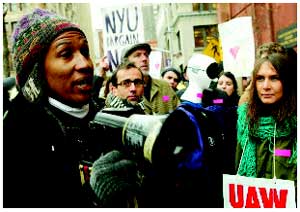 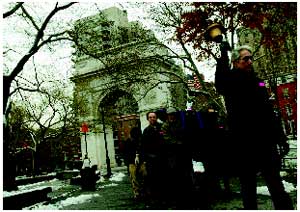 In an increasingly bare-knuckled brawl, NYU President John Sexton issued an ultimatum to striking graduate student employees on Nov. 28: that either they return to the workplace or lose their salaries and jobs.

(GSOC) – the first grad student union at a private university in the country – and salvage a chaotic semester.

“The threats from Sexton are about grades,” said GSOC Chairperson Michael Palm. “He wants us back to

clean up the mess the semester has become.” (Graduate students at NYU grade the bulk of exams and papers.)

“Some people like to say, ‘John Sexton is using the nuclear option’,” added Neuroscience graduate student teaching assistant Mitch Day. “If he puts that card on the table we should call him out.”

campuses. On the one side is a powerful university with a billion-dollar endowment, backed by anti-union

faculty and reportedly aided by high priced union-busting lawyers. On the other side are more than a thousand members of GSOC, part of United Auto Workers Local 2110, supported by undergraduate and faculty committees, local politicians, the labor movement, prominent academics,

religious leaders and thousands of other community members.

Graduate student teaching and research assistants went on strike on Nov. 9 to force the NYU administration

to bargain a second contract and recognize GSOC.

contract in September 2001. The historic contract breathed life into organizing drives at other private universities like Yale, Penn and Columbia. The first contract won wage increases

“It seems so backwards that they are not going to bargain with us,” said History graduate student

employee Jenny Shaw in an Irish brogue. “NYU is so wedded to the idea we are not workers.”

Anteing up in favor of GSOC are many undergraduates and professors. Undergrads formed Graduate/Undergraduate Solidarity (known as GUS) and held a large rally in Washington

Square Park on Nov. 30. The rally included a speak-out where students voiced frustration with the corporate mentality of administrators and paraded a nine-foot-tall puppet of

“This strike is not just about the grad students – as lovely as they are,” said GUS member and undergraduate student Mieke Duffly. Duffly, with the puppet in tow, momentarily confronted John Sexton as he exited Bobst library during the undergrad rally. “My education and personal growth is at stake,” she said.

After the rally, hundreds of undergraduates stormed the library to deliver a letter to Sexton. Once inside

the building, GUS members unfurled a large banner and began chanting, shutting down the library, leaving

students stranded inside and outside of the building. Campus security prohibited GUS from hand delivering

the letter to Sexton.

Outside, confused students became surly at NYU security guards who didn’t allow anyone in the building

for almost half an hour. “This is fucking ridiculous!” fumed a student in spiked hair and an Abercrombie

Another student complained. “I just want to get into the library to study,” said senior John Belliveau-

Flores. “I’m of two minds. Its great they get paid, but I’m not sure they have the right to form a union.”

contract. The faculty group works on university governance issues and says faculty members have been given the cold shoulder or only token participation in how the school is operated. Faculty members have been further infuriated by administrators’ attitude towards the grad student union. According to GSOC, professors have moved over 400 classes off campus in solidarity with the strike.

“The recent policies coming from the administration are appalling to us and our colleagues,” said Andrew

Ross, a member of Faculty Democracy and a professor in American Studies.

Decisions at the national level emboldened the NYU administration. In July 2004 the National Labor

Relations Board decided that private institution graduate student employees were not workers – and not subject to bargaining rights. A Bush appointed majority on the board voted three to two to reverse a

at public universities are subject to different regulations and have had unions since the 1970s.

over workplace conditions. After GSOC agreed to drop grievances, mainly over reclassifying jobs outside

of the union, NYU reneged on its pledge and announced on June 16 that it wasn’t going to negotiate. On

Aug. 31 the contract expired, setting the stage for the strike.

NYU attracts the brightest students from around the globe and President John Sexton got the top job to raise money and to bring in big name professors. The former law school dean, Sexton became president in

September of 2002, after adding $185 million to the law school’s endowment. Full of corporate ethos, Sexton has “branded” NYU’s new identity as an elite school that is liberal, but able to sell itself to stuffy junior executives. If Harvard is the “Corporation,” NYU would be known as the “Enterprise.”

Seeing academics as a market to be captured, NYU administrators revamped the Economics Department

and tooled the Stern Business School with professors plied from other universities. Sexton theorized that NYU could raise the profile of these business friendly departments and cultivate wealthy donors and corporate partnerships.

“Universities, like NYU, think of themselves more like corporations and certain departments as profit centers,” said University of Oregon labor studies professor, Gordon Lafer. But with boardroom ethics, come war-room tactics. Professors complain of being shut out of decision-making processes and grad students find themselves as cheap labor substitutes for tenured professors. Graduate student workers now face open threats from Sexton and department heads for striking.

In the Nov. 28 open letter to graduate students, Sexton wrote, “graduate assistants who do not resume their duties by Dec. 5 or the first scheduled teaching assignment thereafter – while experiencing no consequences for this semester – will for the spring semester lose their stipend and their

Sexton and McLaughlin have their allies as anti-union departments are rallying around the administration.

strike started warning them of there being “appropriate consequences” if they chose to go on strike. The Math and Computer Science Departments form the Courant Institute, and Cole stated he supported the “position of the university” in regards to cutting job assignments and stipends.

Due to pressure from his department, math grad student Fred Laliberte returned to work after

going on strike. “I was one of the last two men standing, but the pressure in the department

was too strong,” said Laliberte, who still joins the picket line.

from factory floors to the ivory tower. Laliberte also said that in his department faculty members were

Lightfoot dispels the myth of NYU strikers being privileged and spoiled. She comes from a West Indian immigrant family and her mother was a union member at Verizon. There is much at stake in the NYU strike. The power dynamic between the administration, faculty and grad student workers hangs in

the balance, as does the corporate direction of the university.

Conscious of the negative connotation the strike has brought to the university, NYU spokesperson John Beckman said, “The whole rhetoric of corporatization is vilification.” If the NYU grad students get a second contract, it could invigorate ongoing campaigns at private universities across the country for graduate student unions. At the University of Pennsylvania, a private college, grad students are advocating for better working conditions. On Dec. 8, they will march through the campus for better healthcare coverage.

“NYU winning is good for us, but regardless, we are still in the position of visibility and strong political capital,” said Bill Herman, spokesperson of the Penn’s grad student employee organization.