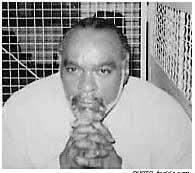 SAN QUENTIN, California—Time may be running out for death-row inmate Stanley “Tookie” Williams.

Barring intervention by Gov. Arnold Schwarzenegger, California will execute Williams by lethal injection on Dec. 13. Williams, who co-founded the notorious L.A. street gang the Crips, was convicted of four murders in 1981.

Since then, Williams has penned several acclaimed books aimed at steering kids away from gang violence. His writing and advocacy have landed him Nobel Prize nominations. In 2004 he was the subject of

Redemption, a film starring Jamie Foxx. Earlier this year, he was given a Presidential Call to Service Award by President Bush.

“Being allowed to live enables me to continue disseminating my positive message to youths and adults throughout this country and abroad,” said Williams in a recent MSNBC interview. “It would [also] allow

me to inevitably prove my innocence.”

Some prison officials have suggested Williams still has a hand in running the Crips. In early November, the California Department of Corrections issued a press release trumpeting his guilt and accusing him of being a gang leader while in prison.

His supporters deny the allegation. They say that six years of solitary confinement spent early in his sentence changed Williams. As evidence they point to his good works in recent years, as well as to his

15-year record of good behavior since coming out of solitary confinement.

In the late ’60s nine-year-old Williams moved from Louisiana to South-Central Los Angeles, where he quickly gained a toughguy reputation in a neighborhood already made infamous by street gangs.

Williams and his cohorts coerced many of the local gangs to join the Crips. Clashes between rival gangs became increasingly violent over the years.

Somewhere along the ride Williams was implicated in four brutal murders: a convenience store clerk shot execution-style and an elderly couple and their daughter shot in the motel they owned. He was convicted and sent to San Quentin.

During the latter half of his time in prison, however,Williams underwent a transformation. He organized a truce between his old gang and the Bloods, their biggest rival. Later, he turned to writing. His books and

speeches inspired tens of thousands of young people to write Williams and relay how his words helped steer them away from gang violence.

“He’s a role model to me,” said Zachary Williams (no relation), a 7th-grade student from Oakland who addressed a crowd of several hundred that gathered at San Quentin recently to support Williams. “I’ve read his books about life in prison. He encouraged me not to do some of the stuff my friends do.”

Just 11 days before Williams’ scheduled execution, on Dec. 2, the state of North Carolina put to death the 1000th inmate executed in the United States since the country reinstated the death penalty in 1976. Gov. Schwarzenegger has said he is considering granting clemency for Williams. He is expected to meet with Williams’ lawyers on Dec. 8.