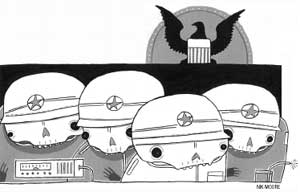 After Rep. John Murtha’s revelation that the U.S. Army is on the verge of falling apart, it’s clear that 2006 will be a make-or-break year for the U.S. occupation.

This realization is the motivating factor in the Bush administration’s campaign for “Victory in Iraq.” It wants to crush the armed resistance within the next year so it can begin to draw down U.S. troops and avoid a rout in next fall’s congressional elections.

Nonetheless, the Pentagon is employing a two-pronged strategy to hasten withdrawal. On the one hand, it is waging total war against many Sunni Arab communities.

U.S. forces have conducted at least nine major sweeps through Western Iraq this year, killing thousands and displacing hundreds of thousands of others. The Pentagon is trying what it calls a “clear, hold and build” strategy.  The idea is to garrison U.S. troops in dozens of small- and medium-sized cities,

mainly along the Euphrates River from Baghdad to the Syrian border.

Yet, this strategy is deeply flawed. First, in terms of “clearing,” one need look no further than Fallujah. After being leveled last year, Fallujah is tightly controlled but since October 24 U.S. soldiers have died in the city and in two towns around it – Al Karmah and Amiriyah – revealing how the resistance consistently outmaneuvers its foe.

Second, in terms of holding, U.S. forces brings with them sectarian-minded troops. According to Patrick Cockburn, all but one of the Iraqi Defense Ministry’s 115 battalions are split along ethnic lines, with 60 “wholly Shiite.” In Fallujah, abusive Shiite troops from the south are said to be more hated than the Americans. Most recently, Vice President Ghazi al-Yawer told the AP that Iraqi forces have suffered a big “setback” in the last six months because they’re being used for political ends.

As for the “build” part, reconstruction is a disaster. Despite more than $20 billion allotted to rebuild Iraq, less than half has been spent, much of this has been transferred to “security,” and oil pumped and electricity generated is still lower than before the March 2003 invasion.

The other component to the Pentagon’s strategy is a dirty war employing death squads, secret prisons and torture chambers.

On Nov. 29, The New York Times reported: “Hundreds of accounts of killings and abductions

have emerged in recent weeks, most of them brought forward by Sunni civilians, who claim that their relatives have been taken away by Iraqi men in uniform without warrant or explanation. Some Sunni men have been found dead in ditches and fields, with bullet holes in their temples, acid burns on their skin, and holes in their bodies apparently made by electric drills. Many have simply vanished.”

Many of the victims are winding up in the Baghdad morgue. In June, 879 and another 1,100 in July. Of these, some 85 percent were men and most were aged 14 to 45. The real number is likely far higher; one member of parliament says there are “60 to 70 assassinations every day and most of these are

This new strategy is a tacit admission by the Bush administration that its policy has failed. Even as U.S. troop levels have increased for two years, now at 160,000, so have resistance attacks, now averaging close to 100 a day, and U.S. casualties have jumped since the constitutional referendum in October.

The U.S. claims it has “stood up” some 212,000 security personnel so far, but more than half come from the Interior Ministry, which is running the dirty war. Most disturbing is the number of prisons run by the Iraqi government, a figure that came to light after a not-so-secret prison was discovered holding around 170 men, many reported to be emaciated and tortured. It is part of a network of a phenomenal 1,100 detention facilities. (This is in addition to U.S. prisons.)

Some ranking officials even deny outright that death squads exists – U.S. Secretary of Defense Donald Rumsfeld dismisses them as “hypothetical” while Iraqi Interior Minister Bayan Jabr’s says “it is nonsense” – but others freely admit their presence.

Author Robert Dreyfuss notes a recent encounter with Adel Abdul Mahdi, one of Iraq’s deputy presidents. Also an official of the ruling Supreme Council for the Islamic Revolution in Iraq (SCIRI), Mahdi didn’t deny that “Iraqi police and interior ministry squads were carrying out assassinations and

other illegal acts.” Dreyfuss adds that Mahdi said of civilian casualties in Sunni towns: “You can’t fight terrorism without attacking some popular areas.”

When Los Angeles Times reporter Solomon Moore asked Interior Ministry Inspector General Nori Nori about the existence of death squads, he admitted, “There are such groups operating – yes, this is correct.”

The U.S. occupation has also tried to deflect blame by pinning the death squads on the Badr Brigade, which is the armed wing of  SCIRI, or populist preacher Moqtada al-Sadr’s Mahdi army. One high-ranking U.S. military officer told the Los Angeles Times that within Baghdad, “The Mahdi army’s got the Iraqi police and Badr’s got the commandos…Everybody’s got their own death squads.”

Iraqi mass sweeps led or supported by U.S. forces are the preferred method for rounding up detainees. On Nov. 12, for example, more than 380 people were detained in one operation by the Wolf Brigade in the city of Baquba. In late May, the Iraqi government launched “Operation Lightning” in  Baghdad and seized around 1,000 people.