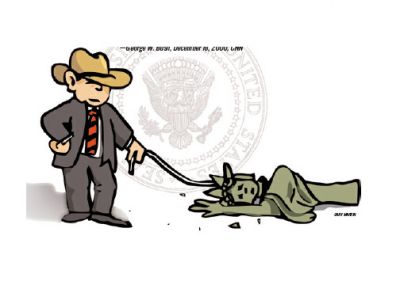 As 2006 begins, we seem to be at a not completely unfamiliar crossroads in the long history of the American imperial presidency. It grew up, shedding presidential constraints, in the post- World War II years as part of the rise of the national security state and the military-industrial complex. It reached its unconstitutional apogee with Richard Nixon’s presidency and what became known as the Watergate scandal – an event marked by Nixon’s attempt to create his own private national security apparatus, which he directed to secretly commit various high crimes and misdemeanors for him. It was as close as we came – until now – to a presidential coup d’etat that might functionally have abrogated the Constitution.

In those years, the potential dangers of an unfettered presidency (so apparent to the nation’s founding fathers) became obvious to a great many Americans. As now, a failed war helped drag the president’s plans down and Nixon’s reign ended in personal disgrace and resignation, as well as in a brief resurgence of congressional oversight activity. All this held in check the imperial presidency – for a time.

Under George Bush, Dick Cheney and their assorted advisers, acolytes and zealots, a virtual cult of unconstrained presidential power has been constructed, centered around the figure of Bush himself. For these cultists of an all-powerful presidency, the holy war, the “crusade” to be embarked upon was, above all, aimed at creating a president accountable to no one, overseen by no one, and restricted by no other force or power. And so, in this White House, all roads have led back to one issue: How to press ever harder at the weakening boundaries of presidential power. This is why, when critics concentrate on any specific issue or set of administration acts, no matter how egregious or significant, they invariably miss the point. The issue it turns out, is never primarily torture or warrantless surveillance, to take just two areas of potentially illegal administration activity. Though each of them had value and importance to top administration officials, they were nonetheless primarily the means to an end.

This is why the announcement of the “global war on terror” almost immediately after the Sept. 11 attacks was so important. It was to be a “war” without end. No one ever attempted to define what “victory” might actually consist of, though we were assured that the war itself would, like the Cold War, last generations.

Even the recent presidential announcement that we will now settle only for “complete victory” in Iraq lays out, in this context, a distinctly limited goal because Iraq has already been defined as but a single “theater” in a larger war on terror. A war without end, of course, left the president as a commander-in-chiefwithout- end, and it was in such a guise that the acolytes of that “obscure philosophy” of total presidential power planned to claim their “inherent” constitutional right to do essentially anything.

Having established their global war on terror, and so their “war powers,” in the fall of 2001, top administration officials then moved remarkably quickly to the outer limits of power – by plunging into the issue of torture. After all, if you can establish a presidential right to order torture (no matter how you manage to redefine it) as well as to hold captives under a category of warfare dredged up from the legal dustbin of history in prisons especially established to be beyond the reach of the law or the oversight of anyone but those under your command, you’ve established a presidential right to do just about anything imaginable. While the gettough aura of torture may indeed have appealed to some of these worshippers of power, what undoubtedly appealed to them most was the moving of the presidential goal posts, the changing of the rules. From Abu Ghraib on, the results of all this have been obvious enough, but one crucial aspect of such unfettered presidential power goes regularly unmentioned. As you push the limits, wherever they may be, to create a situation in which all control rests in your hands, the odds are that you will create an uncontrollable situation as well.

From torture to spying, such acts, however contained they may initially appear to be, involve a deep plunge into a dark and perverse pool of human emotions. Torture in particular, but also unlimited forms of surveillance and any other acts that secretly invest individuals with something like the powers of gods, invariably lead to humanity’s darkest side. The permission to commit such acts, once released into the world, mutates and spreads like wildfire from top to bottom in any command structure and across all boundaries. You may start out with a relatively small program of secret imprisonment, torture, spying or whatever meant to achieve limited goals while establishing certain prerogatives of power, but in no case is the situation likely to remain that way for long.

This was, perhaps, the true genius of the American system as imagined by its founders – the understanding that any form of state power left unchecked in the hands of a single person or group of people was likely to degenerate into despotism (or worse), whatever the initial desires of the individuals involved. In his Dec. 19 news conference defending his NSA program, the president took umbrage when a reporter asked:

“I wonder if you can tell us today, sir, what, if any, limits you believe there are or should be on the powers of a president during a war, at wartime? And if the global war on terror is going to last for decades, as has been forecast, does that mean that we’re going to see, therefore, a more or less permanent expansion of the unchecked power of the executive in American society?”

“To say ‘unchecked power,’” responded an irritated Bush, “basically is ascribing some kind of dictatorial position to the president, which I strongly reject.”

How the nation handles this crossroads moment will tell us much about whether or not “some kind of dictatorial position” for our imperial, imperious, and impervious president will be in the American grain for a long, long time to come.

Tom Engelhardt is co-founder of the American Empire Project and author of The End of Victory Culture, a history of American triumphalism in the Cold War. A longer version of this article originally appeared on tomdispatch.com.