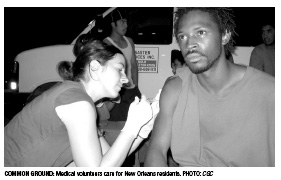 NEW ORLEANS—This city has become a surreal and deeply inspiring hell; a site of post-apocalyptic devastation where racial, cultural and political relations are nuanced, richly counter-intuitive and so unexpectedly jumbled that the prospect of change lingers in the air like a late afternoon thundershower.

The scale of the destruction is impossible to grasp until you have seen it – more than 100,000 cars lie in all manner of disarray; on curbs, upside down, in front lawns and – perhaps most eerily – parked right where they were left when their drivers suddenly fled more than four months ago. There are currently 1.3 million households from the Gulf Coast still residing elsewhere. Bodies are still found every day. Vast areas sit festering, power lines strewn across streets, trees sliced right through houses, two-story homes crushed to the height of their front door. Tens of thousands of homes are filled with rotting furniture, warped floors and swollen drywall. With New Orleanians discouraged from returning home by military blockades, curfews, and the perception that everything is destroyed, the city feels like a ghost town.

Amid this desolation, a remarkable organizing effort has taken root. The Common Ground Collective was formed the week after the hurricane by a group of courageous locals and their regional activist allies who initially armed themselves to defend black neighborhoods from roving white vigilantes who were shooting at young black men. Out of that war-zone atmosphere has grown an organic crisis response team that has diversified and grown extremely quickly into a sophisticated grassroots organization with more than a half-dozen semi-permanent locations and 30-some programs ranging from health care clinics, distribution centers, a pirate radio station, legal advocacy teams, and now house-gutting crews. Hundreds of volunteers from around the country have trekked to the Lower Ninth Ward, the devastated east New Orleans neighborhood where Common Ground is based, and pitched in.

Shortly after arriving with a bus full of volunteers from southern Oregon, I started working with a house-gutting crew. Every house in New Orleans has a spray-painted ‘X’ on the front of it somewhere – with four squares indicating what agency assessed it, what date it was visited, how many, if any, bodies were found inside and other notes like “cat under house” etc. One neighborhood we worked in had the ‘X’s painted on the roofs because boats visited them when the water was two stories high. Each house is full of poignant images; a rusty chandelier hanging in the center of an empty room, a musty attic full of bedding, bullet shells and stale bread where a family was forced to live for days before being rescued. Moldy marriage certificates and ancient cloth wallpaper hidden in walls from an era ago. Mardi Gras beads in every other shovel scoop. The work is brutal and tedious, but the progress a small group of hard workers can make in a day is impressive.

The racism of local, state and federal government is maddening and impossible to overstate. All the paraphernalia of the police state is on display and primarily pointed at the city’s African-American population. I saw countless convoys of military police, police officers from LA, New York and elsewhere, corporate mercenaries on contract from Blackwater and on and on and on, but never a single official from the Federal Emergency Management Agency (FEMA) in the city of New Orleans. Halliburton is being paid $3,000 a house on a no-bid contract to put tarps on leaky roofs, while the homeless and destitute owners and residents of those homes are shunned.

White neighborhoods are being cleaned and the power re-installed and residents given trailers to live in on their lot while they rebuild. In adjacent Black areas with the same level of damage, it looks like it did the day the water receded – no lights, no clean up, no people. In the upscale French Quarter and downtown, businesses and restaurants are largely open.

City leaders are working to pass a law to make it illegal to gut houses or help residents repair their homes in areas the city deems condemned and the city may use eminent domain to give pennies on the dollar to homeowners and forcibly give title of their property to developers. Everything is in upheaval. Competing models of recovery are articulating themselves as they accelerate toward a possible head-on collision that could be very, very ugly.

Will New Orleans be rebuilt on a peoplecentered model of neighbor helping neighbor, local groups funded and empowered to respond to the needs and wishes of residents? Or will a top-down, corporate profit-driven decree be imposed on an already suffering and oppressed people through economic apartheid and brutal state violence?

I could go on telling tales that outrage and frustrate, but depression and anger are not what I want to convey – because truly that is not the way it feels to be here. The city is vibrant, and its people are amazing. Daily interactions are poignant and intimate – there is a raw humanity on display here that is heartening and affirming.

There are also major openings for innovative, visionary solutions and the seeds of those projects are already flourishing. The Common Ground Collective, some of the churches and other community organizations seem like the nitrogen-fixing plants returning to a hillside after a landslide has wiped the old life away. They are making it habitable for the next wave of residents to return. There lives a real possibility that New Orleans will become a proving ground where social justice and sustainability can merge into a model of major relevance to us all. People are being pulled here from all over the country, and within the seething chaos of it all is an electrified sense that something big is birthing here – a movement congealing from disparate directions – an invention of necessity that is addressing issues rapidly becoming universal. Out of the greatest darkness comes the greatest light. Perhaps New Orleans will soon sow the seeds of something better, just as it is now shining a spotlight on the open wounds of our broken, suicidal society.