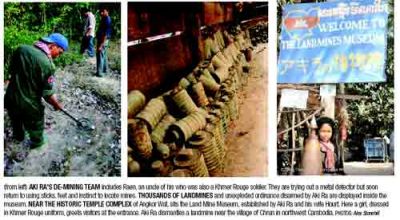 SIEM REAP, CAMBODIA—After driving for an hour in Aki Ra’s beat-up Toyota down an unpaved road lined with drained rice patty fields, we come to a stop and start walking. We head north on a dirt path towards the Thai border and after another hour come to the edge of the dusty and endangered teak forest of Siem Reap Province.The teak trees here are small and thus not prized in the illegal lumber trade. The landscape is devoid of animal life save for mosquito swarms, black flies and cicadas.

Crouching in the red dust of the forest floor, Aki Ra points through the thick underbrush. “I lived here as a soldier in 1987,” he says, his quiet voice competing with screeching cicadas.

“I was 14 and I remember we would have bags on our backs, we could carry sometimes 50, sometimes 100 mines, and we would throw them behind us.” He demonstrates, shuffling backwards.

“Sometimes the soldiers were so close we couldn’t even bury the mines, we would just put leaves on top and keep going, if we were too slow we would, you know, be shot,” he says as he squints, one eye down the barrel of an imaginary gun, and pulls the trigger.

In the mid-eighties this was an uninhabited swath of forest used largely as a battlefield. Since then, the small settlement of Chrun has grown up, housing 177 families of extremely poor peasants who squat this area and hope to create a farming village.

We’re in a known minefield in the forest, perhaps one Aki Ra laid himself, and he’s scratching intently at the hardened clay earth with a hatchet.

It takes him 20 minutes to locate the first mine, laying casually on the forest floor roughly 200 feet from Chrun’s only source of water. It looks like a small green plastic toy, and it’s hard to imagine that it’s powerful enough to kill or maim. The forest buzzes and chirps as Aki Ra silently prepares his tools.

When ready he deftly picks up the Russian-made mine, turns it over and pries it open with a crude instrument he’s fashioned for unscrewing mines. He pulls the detonators out with a pair of pliers, tosses the mine on the ground in front of him and slaps the top jubilantly with an open palm demonstrating that it is safe. The entire process takes less than a minute.

With the location of the first mine, Aki Ra senses the pattern of the minefield around us. Suddenly the sun-dappled forest floor turns deadly as mine after mine is revealed just feet away, thoroughly camouflaged by leaves, dust and shade. “Many thousands of mines in this area,” says Aki Ra, looking up from his work.

After dismantling a handful of mines Aki Ra has to turn back, though he brags that if given a full day he could disarm as many as 100. As he begins packing up in the fading light the high, soft singing of women washing laundry just paces away rises up into the dusky sky.

Aki Ra came to Chrun today not only to demine, but to talk with the villagers about training and paying them to do it themselves under his tutelage. This is a controversial prospect as many of the international agencies involved in de-mining feel that it is unsafe to de-mine without accreditation and argue that the choice of areas to de-mine must be made through careful analysis of planned post-clearance land use. Cambodian law prohibits the handling or dismantling of unexploded ordinance (UXO) and landmines by individuals without proper training.

“You have accidents because the standard operating procedure was not followed,” says Rupert Leighton, country program manager for Mines Advisory Group (MAG). “There is a wrong and a right way to do this…we need to make sure that everyone is doing it as the rulebook is written,” continues Leighton, whose organization succeeds in clearing 4.5 million square meters a year. MAG also trains villagers to de-mine their own land, but believes that it should be done in a standardized and approved manner.

But for Aki Ra the reality is that people are getting hurt every day because they don’t have the knowledge that he does. The farmers in Chrun say one of their biggest obstacles is that landmines and UXO are scattered throughout the forest and cause as many as two accidents a month. They’re also fighting the army for use of the land. Teak wood fetches a hefty price just over the border in Thailand, and corrupt army units deployed by the government to protect it see these squatters as a threat to their own illegal logging profits.

March is the height of Cambodia’s dry season and all over the country peasants are using fire to clear the land for planting rice when the rains come. “This is a dangerous season,” says Aki Ra, who has devoted the last 15 years of his life to de-mining. “The farmers are working the land and moving further afield, this is when they are discovering more mines and explosives. They hope that burning the field will also blow up anything, but they don’t know how to do it and it is dangerous for them.”

Born in Siem Reap province around 1973, Aki Ra grew up on war and violence. By the age of five both of his parents had been executed by the Khmer Rouge, and at 10 he was given an AK-47 and became one of the many child soldiers in their army.

The Vietnamese Army that liberated Cambodia from the Khmer Rouge reached the northwestern regions much later than the rest of the country, and even then the fighting wasn’t over for Aki Ra, who says that for most of his life he only understood the world as being perpetually at war. As a teenage conscript of the Vietnamese he would mine many of the areas he would later commit to de-mining.

Chrun, a holdout of the Khmer rouge until 1998, is only one example of how landmines and UXO still wreak havoc on the Cambodian people eight years after total peace was declared in the country.

Despite de-mining campaigns on the part of the United Nations beginning in ‘92 and a number of large NGO clearance projects, there are still millions of landmines, booby traps, and unexploded ordinance spread throughout the countryside. These dangerous remnants of war are especially concentrated along the border with Thailand and can result in as many as three to four accidents or deaths a day countrywide.

The majority of today’s landmine victims are children sent out to collect firewood and graze livestock and who often play with the mines despite pervasive education campaigns.

Poverty and landmine accidents intersect in this country, which is one of the world’s poorest. Forty percent of Cambodia’s population lives below the poverty line (set at less than 50 cents per day) and 75 percent support themselves by agriculture while environmental resources rapidly diminish. As a result of this economic desperation, many Cambodians, like the people of Chrun, cultivate land known to be mined. Others seek out and attempt to disarm munitions themselves and sell the scrap metal to Thailand in an attempt to feed their families.

Aki Ra is hardly the only one in Cambodia involved in de-mining. Two well-established NGOs and one government agency, armed with expensive equipment, large staffs and exhaustive safety procedures, do one-third of the country’s de-mining. The nature of their work, while extremely well organized and targeted for “maximum community impact,” makes it impossible to respond to new landmine discoveries quickly, especially in remote villages like Chrun. Most de-mining is done by villagers on the spot, with whatever knowledge they have.

“Often the people, they discover landmines and they call the NGO, the NGO sends people and they put up a sign saying there are landmines here, and then they don’t come back for months and months,” says Aki Ra, expressing the difference between his work and that of the larger NGOs, “They call me and I go as soon as I can.”

Aki Ra’s approach is low-tech and immediate. Armed with his simple tools, candy and ramen for villagers, and beer and cigarettes for bribes, he can be onsite and de-mining within hours.

It often takes months or years for larger NGOs to mobilize a new de-mining project. Their approach is to destroy mines in situ instead of disarming them. While they argue that this technique is a safer one – avoiding any direct handling of mines or UXO – it also makes the process more expensive and laborious.

Where the large NGOs can have multi-million-dollar budgets, Aki Ra works from a donation box that collects from $20 to $50 a day. He estimates that it costs him one dollar for every mine he disarms, and by his calculation could de-mine the entire country in a span of five years, for under $200,000.

“They will handle the mines regardless,” he says, referring to the people of Chrun, “they have to, they don’t have a choice. I just want to show them how to do it safely.” In twenty years of handling and disarming mines, he has never had an accident.

Aki Ra’s hands-on, man-with-a-plan approach is not limited to de-mining. The Aki Ra Land Mine Action Museum, founded in 1999 on squatted land near the temples of Angkor Wat in Siem Reap, uses photos, statistics, collected landmines, and other war memorabilia to raise both landmine awareness and money for Aki Ra’s projects.

Through tourists’ donations he and his wife Hourt raise just enough money to keep his demining going and manage to house 20 adopted landmine victims and their own two children. Occasionally he receives a generous individual donation, which he uses to build and fund rudimentary schools in the villages he’s de-mined.

What Aki Ra does is hard to replicate. He is one man with specific knowledge, drive and talent. Many argue that his willingness to demine any place at any time is short-sighted. Larger NGOs prioritize high-traffic areas and ensure through their research that their work will not inadvertently serve renegades seeking to illegally deforest, or the army looking to set up a new base. Still, Aki Ra says, a mine is a mine, and it shouldn’t be in the land anywhere.

The source of Aki Ra’s urgency is painfully visible. The human cost of landmines is evident throughout Cambodia, from one-legged vendors along the chaotic avenues of Phnom Penh to the armless teenagers haunting the ragged alleys of Siem Reap City. There are 27,000 victims of landmines in Siem Reap province alone.

Aki Ra’s vision for his country doesn’t end with de-mining. He wants to petition the government for unused land to start up a sustainable and eco-friendly farming villages for all the street people in Siem Reap.

But right now de-mining takes priority, a goal that is easily communicated in Aki Ra’s simple slogan, “I want to make my country safe for my people,” or perhaps even more poignantly by the poor villager of Chrun that simply said, “When the mines are cleared we can make a village for the people and then we can all make a living as farmers.”

For more information on Aki Ra and the de-mining project, go to commonlanguageproject.net To contribute or learn how you can assist directly with the various projects, email akiramineaction@gmail.com