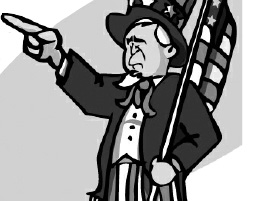 The Imminent Decline Of The American Expire?

The miscalculated policies of the U.S. administration in the Middle East are quickly depleting the country’s ability to sustain its once unchallenged global position. Winds of change are blowing everywhere, and there is little that Washington’s ideologues can do to stop it.

The above claim is increasingly finding its way into the realm of mainstream thinking, despite all attempts to mute or relegate its import. A recent speech by U.S. Republican Congressman and Chairman of the House of International Relations Committee, Henry Hyde was the focal point of analysis by Martin Jacques in The Guardian.

“Our power has the grave liability of rendering our theories about the world immune from failure. But by becoming deaf to easily discerned warning signs, we may ignore long-term costs that result from our actions and dismiss reverses that should lead to a reexamination of our goals and means,” Hyde said.

In his poignant analysis – decoding Hyde’s deliberately implicit thoughts – Jacques argued, “The Bush administration stands guilty of an extraordinary act of imperial overreach which has left the U.S. more internationally isolated than ever before, seriously stretched financially and guilty of neglect in east Asia and elsewhere.”

Ironically, the invasion of Iraq with its “thousands of tactical” mistakes – as recently admitted by Secretary of State Condoleezza Rice – was meant to solidify and ensure the U.S.’ post-Cold-War global dominance. According to Jacques, as inferred from Hyde’s notable speech, “It may well prove to be a harbinger of its decline.” It can also be argued that U.S. adventurism in Iraq has provided other countries the coveted opportunity to further their national and regional interests without constant fear of U.S. reprisals.

While there are indications that Washington is finally waking up to this grim reality, which it has helped create, there are no signs whatsoever that a fundamental change of course in U.S. foreign policy in the Middle East is taking place: The destructive war in Iraq rages on; the self-inflicting damage of unconditionally backing Israel in its endless colonial ambitions perpetuates; and the same detrimental policy line used with Iraq is employed, almost identically, with Iran.

The world is changing, yet the U.S. government refuses to abandon its old ways: militaristic, self-defeating and overbearing. Indeed, the U.S. must remold not only its policies in the Middle East, but also its hegemonic policies throughout the world. For once, the U.S. administration needs to tap into its sense of reason, and discern the “warning signs” that should lead to “the reexamination of [its] goals and means.” A first step is to bring the troops home, and with them the entire doctrine that unrestrained violence and perpetual wars can further the cause of an already distrusted superpower.

Ramzy Baroud is author of The Second Palestinian Intifada: A Chronicle of a People’s Struggle. A longer version of this article originally appeared at palestinechronicle.com.