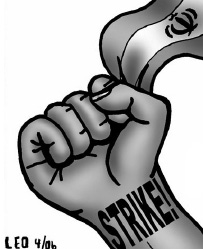 Iran’s recent declaration that it has successfully enriched uranium is bound to further increase tensions between Tehran and the United States. But the Iranian government also has an internal crisis on its hands. The country’s high level of poverty has triggered a series of intense social struggles.

The German newspaper Der Spiegel reported that increasing dissatisfaction about economic conditions in Iran is placing additional pressure on the regime in Tehran. Despite a ban on strikes in the country, the number of workers protesting poor conditions is increasing.

Angered by unpaid salaries and generally low wages, workers in the northern Iranian provincial capital Rasht blocked streets and protested in front of government offices a fortnight ago brandishing banners that read: “We are hungry!” It wasn’t the first time that thousands of employees at the country’s largest state-owned textile factory had laid down their tools. But this time they were joined by dam workers in the western province of Elam and employees of a pharmaceutical factory in Tehran. Recently, workers have also gone on strike against harsh work conditions and impending layoffs in mines and petrochemical plants across the country, with hundreds of coal miners from the northern province of Gilan protesting the fact that they have not been paid for 13 months. Workers were also on strike in the car factories of the Iran-Khodro company, already the site of a massive work stoppage on last year’s Day of Social Welfare and Securities (July 16), when strikers demanded the introduction of a minimum wage.

Iranian President Mahmoud Ahmadinejad promised an improvement in living standards and income when he took office in August 2005, but the country’s economic difficulties persist despite annual oil revenues of about $50 billion. Even though the government has introduced various measures to combat inflation and mass unemployment – in addition to initiating projects designed to combat homelessness – more than 50 percent of the Iranian population continues to live under the poverty line, according to official estimates provided by the Iranian Central Bank. The government institution sets the poverty line at an income of $280 per month for a family of five.

The current strike wave was initiated by Tehran bus drivers in January, and it immediately provoked a harsh response from the government. Several hundred bus drivers were arrested within a few hours of the beginning of the strike. The strike’s leaders – Mansur Hayat Gheibi and Mansoor Ossanlou – have been held in Tehran’s notorious Evin prison for violating the national ban on unions by creating the “Wahed” organization of bus drivers. Hayat Gheibi was released on April 16 after going on a hunger strike, but Ossanlou remains jailed.

While Iran-related statements by Western politicans have largely focused on Iran’s nuclear weapons program, some commentators are beginning to draw attention to the country’s internal conflicts. “Iran’s new government boasts of representing the interests of working men and women. But their violent crackdown on the bus workers’ union make these words ring hollow,” Sarah Leah Whitson, executive director of the Middle East and North Africa division at Human Rights Watch, said earlier this year.