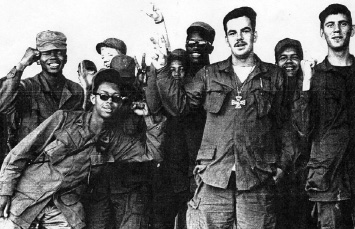 One of the Vietnam War’s most enduring legacies is the widespread belief that protesters betrayed and later mistreated the soldiers who fought in that conflict. The reality – that GIs were at the forefront of the anti-war movement by 1970 and were disobeying their commanders en masse – is strikingly different as David Zeiger’s eye-opening new documentary Sir! No Sir! makes clear.

Combining Vietnam-era footage and present-day interviews with former GI resisters now in their 50s and 60s, Sir! No Sir! brings back to life a multi-racial, predominantly working-class movement that erupted spontaneously, rocked the U.S. political and military establishment and then disappeared within a few short years. The movie takes its audience into the barracks and the stockades, the court-martial hearings, the press conferences, protests, underground GI papers and GI coffeehouses, the battlefield carnage and the veterans hospitals and, most importantly, the consciences of the soldiers who decided they would no longer kill for their government.

For many soldiers, the war simply becomes a battle to save their own humanity. One of the most moving moments in the film is the footage of singer Rita Martinson performing “Soldier, We Love You” – a tender salute to GIs who rebel against their commanders – in front of thousands of rapt service members at a show in the Philippines.

One shortcoming of the movie, however, is that it implies that everyone who was opposed to the military brass became an idealistic activist. Crime and substance abuse were other responses to being stuck in Vietnam.

While most of the people interviewed for the film are little known, one familiar face pops up. Jane Fonda is seen performing to wild applause in front of thousands of GIs at F.T.A. (“Fuck the Army”) shows held in towns near military bases in 1971-72. Far from being the traitorous vixen of rightwing demonology, “Hanoi Jane” appears as a passionate advocate for the vast majority of GIs who wanted the war to end. This and many other scenes in the movie raise a perplexing question: why did this movement disappear so completely from the popular memory to be replaced by the endlessly repeated myth of a “noble cause” betrayed by Hollywood starlets and elitist student protesters? Sir! No Sir! deals with this only in passing. The implications are enormous as it would have been more difficult to launch the Reagan-era military buildup much less the Iraq War if this country hadn’t insisted on learning all the wrong lessons from the Vietnam War.

The film also prevokes another important question: Could the military’s chain of command break down again, this time in Iraq?

Today’s professional, all-volunteer force is better-paid, better-trained and more cohesive than the conscript force that disintegrated 35 years ago. Nonetheless, Zeiger’s film is a timely reminder that rebellion can take root in even the most unlikely circumstances.