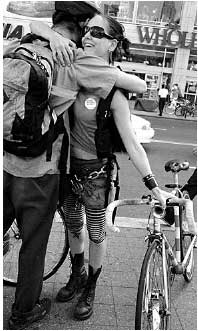 As a regular participant in Critical Mass bike rides during the two years following the Republican National Convention, I have been chased and harassed by every NYPD vehicle in their repertoire: scooters, motorcycles, golf carts, squad cars, SUVs, unmarked sedans and helicopters. I’ve been rammed by a police scooter with such force that it wedged my chain into my bike frame. I nearly broke my neck falling off my bike when an unmarked police SUV charged against traffic at us, sending one rider over the hood. Many times I’ve narrowly avoided the plastic netting that the NYPD uses to trap cyclist at intersections.

And still, the NYPD has failed to break the leaderless bike ride. So it was no particular shock that they would try to issue regulations limiting the number of people able to freely congregate without their expressed permission. Specifically, any non-approved gathering of more than 20 cyclists, 35 pedestrians or any two people violating a traffic law, such as jaywalking, would be considered parading without a permit and the “offenders” subject to arrest.

It did come as a surprise when the proposed regulations were abruptly withdrawn on Aug. 18 – the NYPD is not known for back-pedaling. Here are a couple of reasons why it happened:

The regulations were simply too provocative, angering too many people at the same time. The city council, for instance, was embittered – legislation is, after all, their bag. The cycling community was up in arms, since we are the primary targets. The regulations were so broad as to even threaten the Central Park crowd: they regularly engage in group cycling and running. And, of course, people who simply took all that freedom of congregation stuff seriously were outraged.

The other key factor is this: Through years of NYPD harassment a variety of groups are now working together to defend the rights of cyclists and others threatened by the police and the city government. This formed a united front against the regulations. These groups – New York City Bike Coalition, Transportation Alternatives, the National Lawyers Guild, New York Civil Liberties Union and Time’s Up! were instrumental in halting the regulations and channeling the energies of vast numbers of individuals who banded together to ensure that we maintain control of our streets.