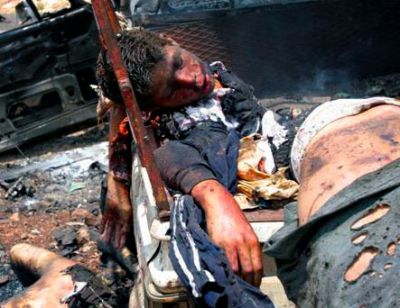 TEL AVIV, Israel—Whatever the fate of the captive soldier Gilad Shalit, the Israeli army’s war in Gaza is not about him. As senior security analyst Alex Fishman widely reported, the army was preparing for an attack months earlier and was constantly pushing for it, with the goal of destroying the Hamas infrastructure and its government.

The army initiated an escalation on June 8 when it assassinated Abu Samhadana, a senior appointee of the Hamas government, and intensified its shelling of civilians in the Gaza Strip. By June 12, the goverment had already authorized a larger-scale action, but postponed it in the wake of the global reverberation caused by the killing of civilians in the air force bombing the next day.

The capture of the soldier released the safety catch, and the operation began on June 28 with the destruction of infrastructure in Gaza and the mass detention of the Hamas leadership in the West Bank, which had also been planned weeks in advance.

In Israeli discourse, Israel ended the occupation in Gaza when it evacuated its settlers from the Strip, and the Palestinians’ behavior therefore constitutes ingratitude. But there is nothing further from reality than this description.

In fact, Gaza remained under complete Israeli military control, operating from outside. Israel prevented any possibility of economic independence for the Strip and from the very beginning, Israel did not implement a single one of the clauses of the agreement on the November 2005 border crossings. Israel simply substituted the expensive occupation of Gaza with a cheap occupation, one which in Israel’s view exempts it from the occupier’s responsibility to maintain the Strip and from concern for the welfare and the lives of its million-and-a-half residents, as determined in the Fourth Geneva Convention.

Israel does not need this piece of land, one of the most densely populated in the world and lacking any natural resources. The problem is that one cannot let Gaza free, if one wants to keep the West Bank. A third of the occupied Palestinians live in the Gaza Strip. If they are given freedom, they would become the center of Palestinian struggle for liberation, with free access to the Western and Arab world. To control the West Bank, Israel needs full control of Gaza. The new form of control Israel has developed is turning the whole of the Strip into a prison camp completely sealed from the world.

Besieged occupied people with nothing to hope for and no alternative means of political struggle will always seek ways to fight their oppressor. The imprisoned Gaza Palestinians found a way to disturb the life of the Israelis in the vicinity of the Strip by launching homemade Qassam rockets across the Gaza wall. These primitive rockets have rarely caused Israeli casualties; they do, however, cause physical and psychological damage and seriously disturb life in the targeted Israeli neighborhoods.

In the eyes of many Palestinians, the Qassams are a response to the war Israel has declared on them. As a student from Gaza said to the New York Times, “Why should we be the only ones who live in fear? With these rockets, the Israelis feel fear, too. We will have to live in peace together, or live in fear together.”

The mightiest army in the Middle East has no military answer to these homemade rockets. One answer that presents itself is what Hamas has been proposing all along, and Haniyeh repeated recently – a comprehensive ceasefire.

Hamas has proven already that it can keep its word. In the 17 months since it announced its decision to abandon armed struggle in favor of political struggle and declared a unilateral ceasefire (“tahdiya” – calm) it did not participate in the launching of Qassams, except under severe Israeli provocation, as happened in the June escalation.

However, Hamas remains committed to political struggle against the occupation of Gaza and the West Bank. In Israel’s view, the Palestinian elections results are a disaster, because for the first time they have a leadership that insists on representing Palestinian interests rather than just collaborating with Israel’s demands.

Since ending the occupation is the one thing Israel is not willing to consider, the option promoted by the army is breaking the Palestinians by devastating brutal force. They should be starved, bombarded and terrorized with sonic booms for months, until they understand that rebelling is futile and accepting prison life is their only hope for staying alive. Their elected political system, institutions and police should be destroyed. In Israel’s vision, Gaza should be ruled by gangs collaborating with the prison wards.

The Israeli army is hungry for war and will not let concerns for captive soldiers stand in its way. Since 2002 the army has argued that an “operation” along the lines of “Defensive Shield” in Jenin was also necessary in Gaza.

A year ago, on July 15 (before the Disengagement), the army concentrated forces on the border of the Strip for an offensive of this scale on Gaza. But then the United States imposed a veto. Secretary of State Condoleezza Rice arrived for an emergency visit that was described as acrimonious and stormy, and the army was forced to back down.

Now, the time has finally come. With the Islamophobia of the U.S. administration at a high point, it appears that the United States is prepared to authorize such an operation, on condition that it not provoke a global outcry with excessively reported attacks on civilians.

With the green light for the offensive given, the army’s only concern is public image. Fishman reported that the army is worried that “what threatens to bury this huge military and diplomatic effort” is reports of the humanitarian crisis in Gaza. Hence, the army will have to let some food into Gaza. From this perspective, it is necessary to feed the Palestinians in Gaza so that it would be possible to continue to kill them undisturbed.

Tanya Reinhart is a lecturer at Tel Aviv University and the University of Utrecht. She is the author of several books, including Israel/Palestine: How to End the 1948 War. This article was first published in Yediot Aharonot on June 21, 2006.