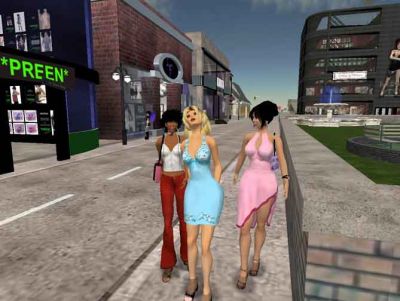 Bonnie Ruberg, a cyber and gender sexpert, warns that treating the online experience as a “trial” space creates a false hierarchy that privileges real over online behavior. Your online persona behaves differently and wants different things than the player at the keyboard. This separation is what enables the escape, the fantasy and ultimately the fulfillment of the experience.

That’s why many players have numerous avatars (online personalities) with different wants, needs and gender. One resident of Second Life (SL) interviewed by Ruberg said her only reason for participating was to run a small gallery in which she could show her paintings (the program allows you to place still images in the businesses or homes that you create). Although this artist is in the minority, the fact that sex is optional in Second Life is a big draw. Ruberg that SL’s “appeal is the open-endedness.”

Second Life has a higher female to male player ratio than your typical MMORPG (Massive Multiplayer Online Role Playing Games), and with many of the male players choosing female avatars, this is no digi-sausage fest. Female gamers are drawn toward an exploratory experience, “one that is on your own terms and not predefined,” says Ruberg.

Probably the biggest draw for both genders is the fulfillment of all the things you shouldn’t, wouldn’t and couldn’t do. In SL, users have created a prostitution economy where hundreds of avatars will give you a steamy lap dance and a BJ for what in U.S. dollars could buy you a dog at Grey’s Papaya. But tip well, because that prostitute might own the cyber brothel you’re being serviced in.

Although you can strap yourself naked to a rotating board surrounded by broken glass, violence in Second Life is a no-no. You can experiment in fantasy rape, but you cannot actually rape another character, because the programming does not support it. “You cannot take full control over another Avatar. You always have the option to fly away,” explains Kyle Machulis of Nonpolynomial Labs. When entering the game for the first time, one must agree to abide by significant bylaws. They forbid intolerance, harassment, assault, disclosure, indecency and disturbing the peace.

And that was 1961. Copious blogs are still dedicated to the question of realness. Is sex with your avatar guy “really cheating?” Are these online relationships less real? Nick Yee asked these questions in an online survey. One 30-year-old male answered, “the fact of physical separation is only a minor limitation; can a blind person not make friends? So why should it be that because we cannot physically see or touch the people in the game with us, we cannot interact in a meaningful way?”