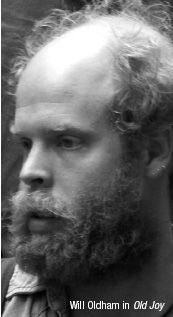 Old Joy is the story of two friends who embark on a weekend camping trip to escape from their everyday lives in present-day Portland, Oregon. Kurt, played by alt-country singersongwriter Will Oldham, is a carefree drifter-type for whom this trip is an opportunity to reconnect with his old friend Mark (Daniel London). For Mark, the trip is a temporary retreat from his suburban life and imminent fatherhood.

This is not a story of two characters undergoing a life-changing experience, but rather a snapshot of two lives at a particular moment in time. It is the type of minimalist flick likely to resonate with its audience who, like the protagonists, are also torn between memories of their carefree youth and coming to terms with adult responsibilities. The film is as much about the current political and social climate as it is about its character. This may be one reason why director Kelly Reichardt avoids radical transformations in the two men, as well as any clear-cut resolutions at the end.

Peter Sillen’s cinematography is outstanding, especially his use of color. The greens of the forest scenes that make up the bulk of the film serve to really immerse the viewer. Even the scene where Will and Kurt set up their tent in a small dump, where people have deposited old kitchen appliances and a sofa, makes the forest look appealing.

In addition to the cinematography of the wilderness, the varied colors of Portland’s landscape also stand out. Reichardt makes the monotony of Mark’s suburban neighborhood seem somewhat intriguing.

While the pace is at times too slow due to the lack of action, Old Joy makes up for this with a subtle complexity that departs from the predictable Hollywood narratives that sometimes make their way even into independent filmmaking.

Also of note is the soundtrack by Yo La Tengo, which is instrumental in setting the film’s subdued, melancholy mood.