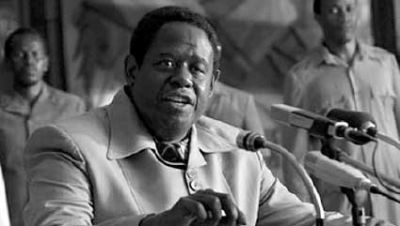 When Forest Whitaker first appeared on the screen as none other than Idi Amin I laughed to myself. I wondered how a Hollywood actor could tap into the emotional depths of a megalomaniacal genocidal dictator in postcolonial Uganda. I was surprised to learn that he had indeed accessed a giddy, maniacal evil that made his performance eerily compelling. I did not suspect, however, that his character resembled the real Idi Amin until old newsreels were shown. Not only does he look a bit like him, he also somehow managed to reproduce the sinister glint in the man’s eyes.

Though Whitaker’s performance is the most talked about element of this film, Idi Amin’s fictitious personal physician is the protagonist. James McAvoy plays a clueless young Scotsman just out of medical school who literally spins a globe and chooses Uganda as a destination at random. At first the young man goes to a village ostensibly to help the poor, but he quickly befriends Idi Amin and is brought into the glamorous life of the richest of the rich in a country full of the poorest of the poor. He sips cocktails lounging in front of the pool, ogles beautiful women with scary 1970s eye shadow, and somehow convinces himself that Idi Amin is a true friend.

He doesn’t have a clue about African politics and, as a viewer, neither do you. The film reduces the incredibly complex political context to a few statistics and inner-circle political intrigue. It could leave you with the belief that 300,000 Ugandans were slaughtered because Africa is just one messed-up place. However, I believe that the writer intended just the opposite. Midfilm, the physician tells a British intelligence agent that one must have different standards for human rights in Africa, that it is a place where problems need to be solved with violence. By this time, one knows to distrust this character’s views. His comment gets to the heart of the story. Originally a Scottish novel, the film is more a critique of the notion of “the White Man’s Burden,” than a treatise on Uganda politics.

As it finally dawns on him that his buddy Mr. Amin is committing genocide with his help, McAvoy does a great job of bringing his character’s internal anguish to the screen, along with the requisite run-for-your-life Hollywood thriller suspense. He plays a believable, well-meaning, gin-sipping, blue-eyed devil.

The poolside party scenes are eerily reminiscent of Berlin in the late 1930s. It made me wonder if someday there will be similar films about us. Will movies show New Yorkers drinking $15 martinis as U.S. troops kill Iraqi civilians by the thousands? This film shows the incredible ingenuity humans use to lie to themselves about the part they play in this scary world, especially if they are busy having a good time.