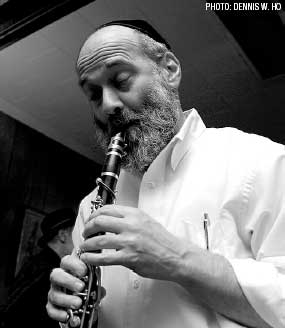 Andy Statman says that “On one level, playing music just happens and is something I can’t control. On another, my experience with the music opens up and plays itself.”

This isn’t a surprising admission. Statman is a vigorous bluegrass mandolinist, klezmer clarinetist, and much-heralded sensation in both worlds. A stubbornly smallaudience artist, Statman is as spiritual as the music he plays that “guides everything that happens.”

Loose-limbed in motion with a fluid swagger in notes, Statman plays so excitedly that he nearly causes the black-cloth kippah to tip off his head. Congregation Derech Amuno, or the Charles Street Synagogue, in Greenwich Village hosts the Andy Statman Trio twice a week.

The band, Statman on clarinet and mandolin, Jim Whitney on bass, Larry Eagle on drums and percussion, makes music that is stacked with down-home goodness, appropriately served with shots of scotch and bourbon on the side. All members carry different channels of charisma. Statman murmurs a low drone over his melody lines, Jim sways and power-kicks sometimes, and Larry rummages in his bag of tricks for unpredictable tools of the trade: chump change, spring drums, bells.

The Andy Statman Trio is not aloof, excessive or crowd-pleasing. What makes them cool is that they play solely for the sake of chasing a journey of music. Spiritually elevating in rapid escalation and steered velocity, the Andy Statman trio thrills with versatility, virtuosity and sophisticated storytelling. They need only each other’s skills to create moving dreamscapes of macabre and joy.

Statman straddles the role of insider as a klezmer musician and role of outsider as a master of another native language with a ripe, robust history: Americana bluegrass. His sound is the collision of two music genres linked in a mission to constantly revive and rediscover. A New York native and first-generation American, Statman comes from a long line of cantors and professional musicians. At the same time, Statman grew up absorbed in Earl Scruggs, Lester Flatt, obsessed with West Virginia shortwave radio and as a teenager sweet-talked his way into New Jersey and Pennsylvania bars to hear tunes. Later, Statman earned a brief stint in Nashville and returned in zealous stride. His influences include mandolinist Bill Monroe, fiddler Vassar Clemens, Peter Wernick, John Coltrane and Thelonious Monk.

Statman is evasive about his authority as a practically peerless musician. He was pivotal in the progressive bluegrass movement of the 1970’s as founding member of the Newgrass collective “Country Cooking,” and collaborated with greats like Ricky Skaggs, Bela Fleck and David Grisman. He is also a primary luminary of klezmer’s revival, as a pupil-turned-protege of Dave Tarras, who bequeathed prized instruments to Statman. Statman’s hunt for heritage led to a collaboration with Itzhak Perlman and the Klezmer Orchestra.

Statman is as defensive and selfwielding as homegrown musicians come. By learning to hide from plain sight of anything commercial, Statman has set himself up for what may seem like a grim, obscure career. Instead, Statman has done something intriguingly radical. By sticking to his artistic integrity, he’s made his own sellout story cease to exist. This is a minor detail that Statman sacrifices for sheer satisfaction of playing music wherever, whenever, and as much as he can. The result is that Statman’s music is gifted, joyous, humble and highly revered. For these reasons alone, the illuminating Statman truly is one of his kind.