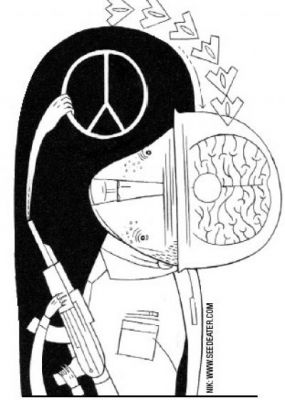 Fort Drum, N.Y. is one of the largest military bases in the northeast United States. This installation has the highest per-capita deployment of soldiers as well as the highest re-enlistment rate of any U.S. base.

Nearly three months ago, author and activist Tod Ensign, along with volunteers from Citizen Soldier and Veterans for Peace, opened a coffeehouse for GIs a few miles from Ft. Drum. The Different Drummer café is similar to those that sprang up during the Vietnam War to provide off-duty soldiers with a place to hang out, listen to music and become politically active. (See below for more on the Vietnam-era GI coffeehouse movement.)

THAT WAS THEN – THIS IS NOW
I ask Ensign how many soldiers have been coming into Different Drummer since its opening. “Some soldiers come into the coffeehouse when we have an event – like live music. They’ll hang out, they’ll dance, and then they might check out the books, look around curiously but that’s it. So far we have not been able to attract more than a few soldiers.”

Ensign’s café is the first of its kind since the Vietnam era and aside from “getting the word out” about the café, he faces deeper challenges. “The conditions of service and who serves in the military today are much different than during Vietnam,” he tells me. The most fundamental difference is that the military is now an all-volunteer force. Cultural differences are significant, too. The counter-cultural movements of the 1960s appealed to a lot of young soldiers who served at that time.

“During the GI movement there was a sense of identification with this larger movement – anti-war, anti-imperialist, women’s movements, black movements” and a culture of music, sex and drugs that coexisted with those politics, which soldiers could access and be a part of when going to coffeehouses. This sense of connection to a larger movement doesn’t seem to exist today. Another crucial difference, he tells me, is how people access information today. “The coffeehouses thrived on the publishing of newspapers. There were 250 papers and newsletters – some of which lasted a few issues and some of which lasted a few years. Today, I can’t see any evidence of that. We’ve tried to get something going up there, to have a blog and have people write about their experiences, and so far we haven’t had any luck.

“Bookstores were also an important part of the GI projects. Yet, from what I can see, young people don’t seem to be drawn to books or pamphlets. We have a whole bookstore there, racks of books, some of which we give away for free and we are hardly able to even give them away. “The use of writing and engagement around publishing doesn’t seem, so far, to be a draw at all. No one comes in and says, ‘I wrote this poem, I’m back from Iraq.’ ‘I wrote this rap, I’m back from Iraq.’” As for printing it, “that hasn’t happened so far.”

“Soldiers don’t come in where it’s going to be a discussion, where there’s going to be dialogue and to maybe hear their views on uranium weapons, or their views on whether they should be sent back for a third tour.” Therefore, many of the events at Different Drummer feature either live music or film screenings, including a Saturday afternoon film series.

DIFFERENT APPROACHES
“We’re in a testing period now,” Ensign says; “We are trying different methods, different approaches and we’re trying to outreach in different ways.” The ultimate goal, he says, “is to figure out ways to get the trust of people and make them see our coffeehouse as a social space that is open to whatever they want to work around, organize around.” A Vietnam vet who works at Ft. Drum and helps Different Drummer told Ensign under condition of anonymity that mental health services on the base are overrun. Using this knowledge, along with the fact that a high percentage of soldiers returning from combat are already likely to suffer posttraumatic stress disorder (PTSD), Ensign and his team have put an emphasis on “providing neutral information” on these issues.

The café is planning an event in February featuring a specialist on PTSD and is hoping to have personnel from the Veterans’ administration medical services attend. This information will also be available at the café’s St. Patrick’s Day event, which will welcome home the 3rd Brigade, nearly 6,000 troops, from Iraq.

Aside from the psychological effects of war, Ensign says soldiers at Ft. Drum face basic quality-of-life issues. Different Drummer is looking at housing problems, which force some soldiers to be bussed nearly 30 miles to get home from the base, and family pressures on soldiers facing multiple deployments as potential areas to offer support.

In terms of convincing soldiers that enough is enough, Tod believes there is a lot of work to do, but the tipping point may be nearing. “It is a conjuncture of events: It’s falling public support, it’s doubts within the military itself about the enterprise, it’s the toll that it takes on them with post-traumatic stress, with their families, their children, the injuries – and I have to believe that at some point it’ll begin to erode and crack. When that happens we have to be in a place where we can connect to them.”

A DIFFERENT ERA: A LOOK AT THE GI COFFEEHOUSES OF VIETNAM
The first GI coffeehouse popped up near Ft. Jackson, S.C., in January 1968 and was jokingly called “UFO” – its name a play on the military’s clubs known by the acronym USO. It was the only integrated place in the city, its regulars consisting not just of blacks and whites, but also students from the local university and GIs.

Within a year, more than 20 similar coffeehouses opened near military bases throughout the United States, attracting a large number of GIs against the war. Eventually soldiers began to use the cafés as places to write about their experiences and views on the war. By 1970, more than 50 underground newsletters were being clandestinely circulated on military bases throughout the country – including publications like Fed Up!, Bragg Briefs, Helping Hand and About Face.

The cafés became small centers for dissenting soldiers while serving domestic assignments. They fed not only underground publications and served as places to plan actions on the bases. This dissatisfaction with the military and the war spread to the front lines of Vietnam as well.

The first coffeehouse, UFO, was closed by a court order that declared it a “public nuisance.” Some of the other cafés were targeted by firebombs and by local police. Following the end of the war, many closed.