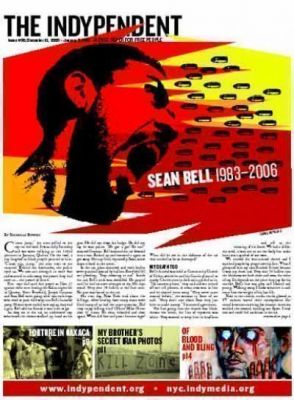 A first person article in the Dec. 13 issue of The Indypendent (“Return from the Killing Fields: NYC Woman Confronts Her Brother’s Actions in Iraq”) about a sister’s anguish over the atrocities her brother participated in in Iraq touched a nerve with our readers and was fiercely debated on indypendent.org.

UNSPEAKABLE
What your brother did is unspeakable (and worse, he views it as entertainment for his friends) and the fact that it is a war does not make it excusable.
—ANG

COMPLICITY
Society didn’t force him to become a torturer or a murderer. You are currently complicit in war crimes. Unless you take immediate steps to prevent future atrocities, you will share responsibility for them.
—NIGHTWALKER

“FAMILY IS WAY MORE IMPORTANT”
Here you people are, like a bunch of jackasses, showing your fake-as-hell empathy for the tortured Iraqis and being complete DICKS to someone with a real dilemma, who supported the war as little as you did. You just want to hang her out to dry so you can see her videos on tv and yell and scream about how right you were that the American military is
running Iraq like a fascist regime. I sat there and read that damn compelling story and almost fell out of my chair when I saw some of the stuff you people were saying. You should fucking be ashamed of yourself. You’re all equally as huge, self-righteous, egocentric jackasses as the far right. Family is way more important than any fucking war.
—WOW

MY BROTHER IS ALSO A MARINE
I wanted to write and thank you for your thoughtful piece “Return from the Killing Fields.” It is uncanny how much your experience seems to mirror mine – I also am strongly opposed to the Iraq war and have a brother who is a demo expert in the Marine Corps. He recently embarked on his second tour in Iraq, and the hardships and conflicts suffered by myself and my family members are difficult to communicate even to my closest friends. Your struggle to maintain a close relationship with your brother and your aborted attempts at forgiveness spoke to my own difficulties.
—APPRECIATIVE

WHAT ABOUT THE IRAQI’S SISTER?
It must be a painful position to be with a brother that you love who has committed a brutal crime. War crimes are a complicated, mindnumbing, ignored subject, but you say this man [your brother] filmed and photographed the torture and death of others and took part. Don’t the victims’ families also deserve compassion, justice, support? Maybe that young man who was brutalized had a sister too.
—QUESTION

SHED LIGHT ON THE CRIMINALITY OF WAR
Your brother did it because he could and, from what you say, appeared to be proud of his actions. Why else show it to his friends? Regardless of whether you’re a soldier in a war zone or not, it is wrong and many soldiers would not be a part of what your brother did, so you can’t blame the war, the army, the situation for everything. He needs help and you are in a position to help him, heartbreaking though the results might be, and by becoming public, you could also shed light on the criminality of war, standards for enlistment, lack of oversight, and gross negligence in the field.
—ACT NOW!

A BROTHER’S KEEPER
Most wars (and warlords) thrive on ignorance and prey on the young. Young soldiers are the most physically fit for service and still do not have the life experience necessary to create their own set of beliefs based on a full life experience that will prevent them from committing these types of acts. Do not blame your brother. That’s just war. There is no fair or antiseptic war. It’s always men doing horrible things to each other. He will have to confront his demons on his own time and in his own way. You are part of your brother’s basic circle of existence. Give him the one thing you can, and that nobody else can, which is your love free of prejudice. Eventually (probably a long process) he will come around, and he will need you and your family more than ever.
—TOMAS

AUTHOR’S REPLY:
I recognize that people are outraged and should be. It oftentimes gets directed at the wrong person. I don’t identify with the left anymore because I find many use real lives to feed their self-righteousness. Most leftists – those that I have encountered, and that’s been quite a few – don’t have any huge moral dilemmas or find themselves in the grey area. I am outraged too, but conflicted in so many other ways for which you have no understanding. If you need to know, I don’t have any guilt or feel “blood on my hands” because I refuse to throw my brother in jail. I am so much closer to the war in a different way than most people are. You wouldn’t believe the different layers there are. It consumes you. But, we all do feel it somehow. This is all totally fucked up, but I don’t think throwing soldiers in jail is going to work.We have to get to the root of all this, otherwise it turns into a witch hunt.
—LEAH LARSON
Link to original article and complete comment postings: http://www.indypendent.org/?p=693