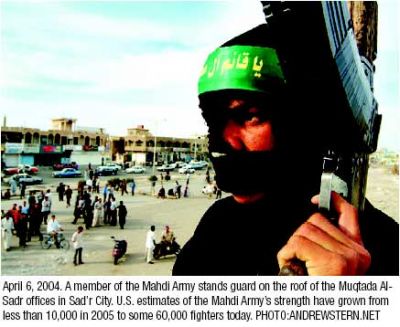 There is no such thing as “the Iraqi Shia”; rather there is a religious community intersected and divided by class, kinship and regional and geographic factors.

This is why Muqtada al-Sadr has emerged as the most important figure in postwar Iraq. His power derives from a clerical and social welfare network, street loyalty, nativism, urban tribal networks, the dispossessed, Baghdad’s Sadr city, Iraqi security forces and a large militia, the Mahdi Army.

As scion of the revered clerical family, Muqtada Sadr inherited control over his father’s network of mosques, social services and underground organizations after his father’s murder in 1999 at the hands of the Ba’athists. When Saddam Hussein’s regime collapsed in April 2003, Sadr and loyal clerics mobilized followers to provide healthcare, security, traffic control, etc. and to offer relief aid and become a voice of the impoverished urban Shia.

Sadrs followers tend to be xenophobic; they are opposed to the Iranian clerical authority in Najaf and want to put in its place an Iraqi authority. This is why it’s unlikely that Iran supports the Sadrists. They are puritanical, blamed for firebombing liquor stores and cinemas and attacking women who don’t adhere to their strict dress codes. Sadrs base is drawn in part from urbanized Shia tribes that moved into Baghdad under the Ba’athists.

While Sadr and his followers were opposed to the U.S. presence, they didn’t confront it at first. The Mahdi Army was set up in July 2003, well into an occupation that was being bungled. In 2004, the United States tried to break Sadrs movement through arrests and closing its newspaper, resulting in two separate uprisings. The first coincided with the assault on Fallujah that April. The second happened over the summer, mainly in the holy city of Najaf and in Baghdad.

While Sadrs reach extends through kinship networks from Baghdad to other southern cities, such as Basra and Amara, his forces were unwelcome in Najaf, which was a stronghold of middle-class Shia who benefited significantly from religious tourism. Many in Najaf support another Shia party, SCIRI, and were passive observers to the massive U.S. firepower unleashed on Mahdi fighters. In Najaf and Baghdad, thousands were killed in the U.S. bombardment.

Following the twin uprisings, the Sadrists decided to seek power through the U.S.-organized election process. They won 30 Assembly seats in the December 2005 election, more than 10 percent of the national legislature. Following the bombing of the Golden Mosque in Samarra last year, Mahdi militiamen and allied police began slaughtering Sunni Arabs, pushing Iraq into civil war.

U.S. forces continue to attack Mahdi militia in one-sided skirmishes, but they have not taken the bait. They have improved from their dismal performance in 2004, but are no match for U.S. forces, as is the Sunni insurgency. Rather, they are concentrating on ethnic cleansing in Baghdad to chase out Sunni Arabs and widen their power base and on periodic battles with SCIRI’s Badr Brigade for control of various southern cities and towns.