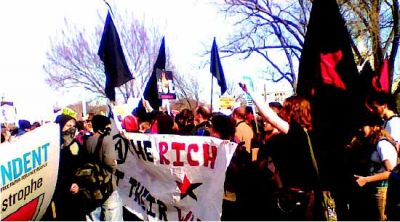 Since the Vietnam War, it has been an article of faith on the left that another unpopular war with thousands of U.S. casualties would generate a heated opposition. The problem is this scenario has never been put to the test until now, more than 35 years after the peak of the Vietnam antiwar movement. During that time a lot has changed in the United States. The Iraq War may be just as unpopular among the American public as the Vietnam War was but there is no mass movement agitating for its end.

The first major difference is that the Vietnam antiwar movement drew strength from the explosion of social movements in the 60s — primarily among Blacks, students and women — there was a sense of moving from victory to victory with the political establishment and wealthy under constant attack.

Confusion on the Left

Today, there is no left anymore. What exists is fragmented, episodic and reactive. The antiwar movement is able to mobilize large numbers in ritualistic protests, but it is unable to translate those numbers into political leverage to bring an end to the war or sustain day-to-day organizing.

The draft also played a critical role in antiwar organizing. With the military dependent on manpower from youth, draftees by the late 60s were a product of the sex and drugs and rock ‘n’ roll counterculture that was an anathema to military discipline. The ascendancy of the left at the time also meant that youth were at least familiar with concepts of anti-imperialism and anti-capitalism, if not outright proponents.

The GI antiwar movement reached its peak in the early 70s, leading to the breakdown of the military machine and the eventual U.S. withdrawal from Vietnam. Today’s volunteer army is older, more likely to be married and much more likely to be conservative in their politics and social attitudes.

Attempts to build a GI movement this time have met with limited success. While most service members have soured on the war—last year Zogby International reported 72 percent of troops in Iraq wanted the war to be over in a year—there hasn’t been any sort of mass opposition among the ranks to the war. As military personnel tend to come from relatively small segments of the population, committed opposition among the public is limited. Most Americans may think the Iraq War is a disaster but they do little to oppose it because they don’t think it affects them.

The counter-recruitment movement had some initial successes in reducing military recruitment rates, but few groups have been able to sustain the hard work it takes to be a constant presence outside recruiting stations. The Pentagon has also relaxed almost every standard imaginable while funneling billions more dollars into full-time recruiters and bribes to get youth to sign up for the military.

A third factor is the rise of neoliberalism. With more than half-a-trillion dollars burned on the Iraq War already, there is an organizing opportunity in tying the defunding of social programs to the obscene military budget. But under the ruling neoliberal paradigm that all relations should be subject to the market, the majority of Americans buy into the notion that government should not provide social welfare or monetary assistance (unless it’s middle-class entitlements like social security or mortgage deductions). Sure, some groups still go around chanting, “Money for Jobs, Not for War,” but it has little resonance with the public at large.

Tying the Local to the Global

As for anarchists and the remnants of the global justice movement, they have been largely invisible. Many say they are refocusing on community organizing instead of national organizing. This is a false dichotomy, however, and was the same mistake the left made in the early 70s when it fragmented into a hundred different movements from labor, environment, back to the land, feminism, identity politic, etc.

Movements gain power by tying community organizing to national and international issues. The explosive growth of the global justice movement at the turn of the millennium strengthened local organizing by joining them in a broader movement against the political and economic forces that shape our lives. Taking on issues of neoliberalism and imperialism — in a way that is connected to people’s lives — brings far more people into movements than toiling away on narrow issues, no matter how important, like genetically modified food or tenants’ rights.

Anarchists and anti-authoritarians have failed to organize a more militant wing of the antiwar movement. After four years of war it’s inexcusable that these tendencies have not attempted to organize a national conference around the Iraq War nor have they tried a large-scale direct action in Washington, D.C., to try to shut down the city during a work day. What there has been is a lot of complaining about the main antiwar group, United for Peace and Justice (UFPJ).

United for Peace and Justice

United for Peace and Justice (UFPJ) has played the central role in the antiwar movement since 2003. While it has failed to take advantage of opportunities, it should not bear the entire blame for a feeble antiwar movement. It is ultimately just one actor. Examining its role and position is important, if only for analyzing where the organizing opportunities are.

UFPJ is timid and unimaginative in it approach, relying on weekend protests, lobbying and petitioning to stop an illegal war. These tactics rely on the notion that we have a functioning representative democracy where elected officials respond to appeals from constituencies. That has never been true in American history and six years of Bush administration rule should convince even the naive that the United States more closely resembles a totalitarian state than a textbook democracy. This means tactics and strategy have to adjust to using methods that can build the movement while exerting real pressure.

A “coalition” of 1,400 peace and social justice organizations, UFPJ has twice, in 2004 and 2006, decided to restrain the antiwar movement to aid the Democrats’ chances at the polls. (Perhaps a dozen large organizations and key individuals determine UFPJ’s day-to-day strategy and tactics.)This past fall, UFPJ could have made an impact by targeting pro-war Democrats, but it closed up shop under the misguided strategy that a Democratic Congress was more likely to end the war. As anyone can see, the Democrats have responded to the overwhelming antiwar sentiment by issuing meaningless resolutions even as they rush to approve any sum of money Bush wants for his latest escalation. The Democrats support empire and the Iraq War as much as the right and any competent antiwar movement needs to go after the Democratic Party just as fiercely as the Bush administration.

UFPJ leaders have taken the opposite approach by courting Democratic stalwarts such as organized labor, the National Organization of Women, MoveOn and Jesse Jackson’s Rainbow/PUSH Coalition. Sadly, part of UFPJ’s motivation appears to be money. According to an inside source, UFPJ has asked some of these groups for funding, which have turned it down. While these constituencies need to be involved to have an effective antiwar movement, their leaders are slavishly loyal to the Democrats and one of their primary roles is to protect its left flank by neutralizing any threats to the party’s real agenda, which is pro-wealthy, pro-corporations and pro-empire.

Counter-Recruitment Is the Key

With the Iraq War about to enter its fifth year, there has been a retreat from antiwar organizing among left and progressive groups in general. The usual reasons are that it’s too difficult and too overwhelming to sustain regular antiwar organizing with no sense of how to gain strategic leverage.

This is more a reflection that the left does little organizing anymore than the difficultly of the task. If every community group in New York, or any other city for that matter, asked its members to spend one day a month on counter-recruitment activities, even just standing outside of recruiting centers and handing out flyers, it would mean there would be a daily presence at most of the major centers.

Counter-recruitment is the key because the Bush administration’s future war plans are dependent upon increasing the size of the military (which the Democrats support almost without exception, too). Hampering recruitment would is the most effective way to attack the Iraq War, and one of the best ways to engage in one-on-one organizing. It can also, over time, build the type of success that can generate a groundswell.

With year 5 of the Iraq War about to begin, we also need to recognize that this war is going to be going on for a long time, which means that periodic marches, no matter how big, will do little to stop the war.