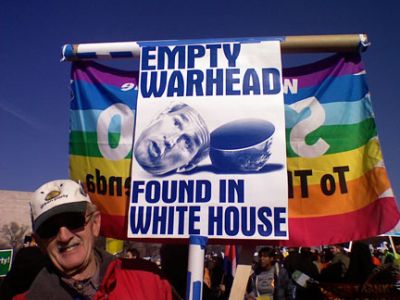 PHOTO: GILLIAN KALSON
They came. They marched. They went home on their air-controlled busses.
The 75,000-150,000 antiwar demonstrators who turned out on the Mall in Washington, D.C. on Jan. 27 didn’t represent the largest such gathering that has taken place over the past four years but the protesters’ presence was still salutary. Each of these mass demonstrations chips away at the legitimacy of the Iraq War and the leadership of George W. Bush and makes the desire for a different course more acceptable. But this is hardly enough.There is much, much more that can be done to pressure the system from both inside and outside to end the U.S.-led slaughter in Iraq as rapidly as possible, as a variety of organizers interviewed in the new issue of The Indypendent point out.Still, the peace movement needs to be honest with itself—that it is in a long-term struggle not against just this war or the next war but against an interlocking system of economic, military and political domination that soaks up our nation’s wealth and seeks to colonize our minds with feverish visions of an Orwellian “global war on terror” that is intended to be a permanent war for a final, universal peace.

Our government is currently pumping upwards of $600 billion per year into a vast Military-Industrial-Complex. Assuming no budget increases, it will spend more than $6 trillion on “national security” in the coming decade including billions on futuristic weapons. There are more than700 U.S. military bases spanning the globe and no thought is given by policymakers to reducing the U.S.’s “security footprint”. When President Bush recently announced plans to increase the overall size of U.S. ground forces by 92,000 soldiers and marines over the next five years, the Democrats greeted the news with a sigh of relief.

Always reacting to the latest war and operating inside a larger culture of instant gratification, the antiwar movement can rarely focus beyond the next big protest or at most the next electoral cycle. But, these are quick fixes. Large protests are the froth riding atop a cresting wave. It is a patient, persistent approach to outreach, education and organizing along with galvanizing moments of non-violent direct action that set a movement in motion. This requires both more resources for building grassroots organizations and a deeper sense of commitment from people who are concerned enough to occasionally turn up at a demo.

The antiwar movement will truly flourish when it is able to go beyond simply reacting to events and find a visionary narrative rooted in the idea that peacemaking is something that starts from within but need not stop there, that it is something we can do anytime, that it builds healthy communities and it need not be the preserve of full-time activists.

As we become the peace we seek in ways small and large, we create a more grounded culture that sees through government and media fear-mongering and that in turn can nurture a vibrant, ongoing, resistance against militarism in all its manifestations. This kind of collective, outwardly directed defiance will take many forms.

A Moment of Reckoning

There will be a moment of reckoning in the coming years when the final debacle of U.S. involvement in Iraq is made clear. A similar moment occurred in the early 1970s when the U.S. withdrew from Vietnam and the draft was ended. At that juncture, most of the antiwar movement demobilized, essentially declaring “mission accomplished” and leaving the playing field wide open to conservative demagogues who subsequently blamed defeat in Vietnam on weak-willed politicians and treasonous antiwar protesters.

As a society, we were unable to break with either our illusions about the efficacy of violence or the innate virtue of our government nor were we willing to take responsibility for the unspeakable crimes that were committed against the Vietnamese people. So, here we are bogged down again in another futile war of aggression, this time in the heart of the most unstable region on the planet.

When the moment of reckoning about Iraq does come it will offer a painful but potentially liberating process of collective self-examination as people ask what went wrong. The easy answer will be to blame Bush, Rumsfeld, poor planning and execution or the demonstrators who “emboldened the enemy” with their protests. It will be up to the antiwar movement to pose more difficult questions about the impact of U.S. imperialism at home and abroad and the racial and gender constructs that help sustain it.

Such a dialogue is urgently needed and could help open up space for an alternative, life-affirming vision of peace and justice that many can share in creating. This vision stands in stark contrast to the Pentagon’s dystopian plans for a future filled with resource wars, climate chaos, seething social tensions, urban counterinsurgency, advanced robotic weaponry, limited nuclear war and so on.

Only a robust, multi-racial, multi-issue and deeply grounded antiwar movement can derail empire in favor of democracy.

John Tarleton has covered the antiwar and counter-recruiting movements for The Indypendent since 2002.