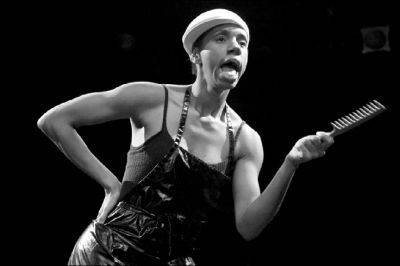 Venus Opal Reese takes on a daunting task with her solo show, Split Ends: the history of black women’s hair in America. She employs dance, song, spoken word, and video footage compiled from more than 100 interviews with Black women about their hair. Her spellbinding stage presence brings to life an array of characters, from a drag queen to a small child to victims of cancer and rape. She excites audience participation, asking questions and demanding responses and even brings a few on stage as characters.

However, an essential element is missing: the history.

In her opening piece, Reese declares, “White people ain’t the problem, you [Black people] the problem.” She then produces advertisements for hair straighteners for kinky or curly hair circulated in the Reconstruction Era. The ads appeared in Black publications and Black people made the products. Thus, hairpluspills.com concludes that the desire for straight hair and the many complexes that stem therefrom are wholly the fault of African-Americans themselves.

This angle and conclusion are, to put it mildly, flawed. Her exploration should have begun with the hair itself, not a conflict. The first relevant conflict was not about straight hair; it was the struggle to hold on to the West African tradition of covering hair with colorful prints or head wraps. Still, she neglects to contextualize even the “straightening conflict.” The straightening of kinky hair did not develop in a vacuum, but among social pressure for former slaves to “Anglify” themselves, and hair is one of a few race-distinctive features that are also alterable. Moreover, slavery went beyond physical bondage, it included psychological chains that have yet to be unlocked. If the desire for straight hair had not been created from the trauma of slavery and the subsequent subordination of Black Americans, hair straightening would have been a popular practice in pre-colonial Africa.

Instead of “making sense of split ends,” as Reese claims to do, this mistake damages them further.

Despite the flaws of the performance, it was refreshing to see a contemporary engagement with Black aesthetic theory, first developed during the Black Arts Movement of the 1960s and 1970s. The movement emphasizes art as an agent of revolution and insists that Eurocentric paradigms be replaced with Afrocentric paradigms. Blacks were the primary audience and the movement catered to Black cultural knowledge.

Split Ends embodies this paradigm with hilarious impressions of Tina Turner, Missy Elliott and Patti Labelle. Reese never introduces these women by name, but wears wigs of their signature hairstyles, lip-syncs their songs and imitates their movements. At one point, she falls on the floor in a violent shaking to mimic Patti Labelle’s passionate performance style. She assumes that the audience is familiar with African-American culture. If you’re not, you don’t get the joke. And there’s no apology.

Another highlight is Reese’s impersonation of U.S. Secretary of State Condoleezza Rice. Here, Reese wears a wig reminiscent of Rice’s bob and a suit jacket. Never naming Rice, she monologues that she was conscious of the two “strikes” against her: race and gender. Thus, she did everything in her power to subvert them. She masked her Southern accent, studied classical music and became an expert in international affairs. Again, she relies on the audience’s awareness of Rice’s background. In the end, when she stands in front of a flowing image of the U.S. flag with an impeccable replication of Rice’s signature half-smile, it is unmistakable.

The play ends with Reese attempting to soothe the audience’s conscience because there is no shame in selling yourself. “If you sold it, that means it was yours in the first place… If you had the power to sell it, that means you can buy it back.” It’s an admirable attempt at empowerment, but makes the lack of history and contextualization all the more disappointing and apparent.