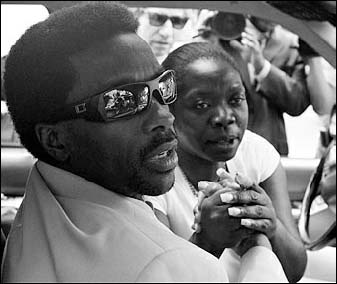 On Jan. 30, U.S. District Judge Nicholas Garaufis condemned Ronell Wilson to die for killing two undercover New York Police officers in Staten Island during a sting operation in 2003. It was New York’s first death sentence in over 50 years as administered in a state in which less than a third of the population supports the death penalty, according to a September 2006 New York Times-CBS poll.

The impact of Wilson’s sentencing reverberated a week later at the National Black Theater in Harlem, as four wrongfully convicted men spoke about their ordeals at a panel hosted by the Campaign to end the Death Penalty and New Yorkers against the Death Penalty. Jeffrey Deskovic, Lawrence Hayes, Alan Newton and Yusef Salaam were all exonerated of crimes ranging from robbery to rape to murder. They spent between six to and 21 years in prison, and Hayes passed two years of his life on death row. “It’s important for us to talk about the people that are innocent and wrongfully convicted, but it’s also important for us to talk about the ones that are guilty,” said Lee Wengraf, a board member of the Campaign to End the Death Penalty.

Wengraf excoriated the government for “making an example” out of Wilson. The intervention of U.S. Attorney General Alberto Gonzalez was instrumental in moving Wilson’s case from state to federal court in order to obtain a death sentence. (The New York Court of Appeals ruled that the death penalty violates the state’s constitution.)

“Ronell is one of the many thousands of people who the government disinvested itself from – “ they said it was okay to strip the social investment from communities [like the Stapleton Houses, a Staten Island housing project where Wilson grew up], which creates conditions that foster crime,” said Wengraf. “They want the Ronell Wilsons on death row so they can say; “they’re the worst of the worst, they’re the ones causing problems.'”

Lawrence Hayes, a former Black Panther who was wrongfully convicted for killing a police officer in 1970, spent two years on death row in New York. Paroled in 1991, Hayes spoke passionately about the harm America’s fixation with the death penalty wreaks at home and abroad.

“This country is holding humanity back from that next step, which is to appreciate, value and respect life. And we right here have an opportunity to change that.”

Yusef Salaam is living proof of how public hysteria and overzealous authorities pervert America’s criminal justice system. Convicted at the age of 15 for rape and assault in the infamous Central Park jogger case, Salaam was exonerated in 2002 when a serial rapist already behind bars confessed to the crime. Throughout his trial, real estate tycoon Donald Trump took out advertisements in the major New York papers advocating the death penalty for Salaam and his co-defendants.

In the last two and half years, 10 prisoners sentenced to lengthy prison terms in New York state have been found innocent after reviews of evidence in their case. Jeffrey Deskovic and Alan Newton were both released last year after the DNA evidence in their case was reexamined at the insistence of the Innocence Project, a litigation organization dedicated to reforming the criminal justice system.

The case for axing the death penalty is strong,“ relatives of homicide victims have given testimony to state commissions in New York and New Jersey advocating its abolition, and studies show that it is more expensive to execute a prisoner rather than incarcerate them for life.

Even New York’s Federal Courts are not single-minded in this matter” on Feb. 9, a jury refused to reach a unanimous verdict to execute drug kingpin Kenneth McGriff for ordering the assassination of two rivals in the 1980s. According to one of McGriff’s lawyers, David Ruhnke, the death penalty was an unlikely outcome in the case because “the rest of the country is falling out of love with the death penalty, and the Bush administration is still in the infatuation stage.”