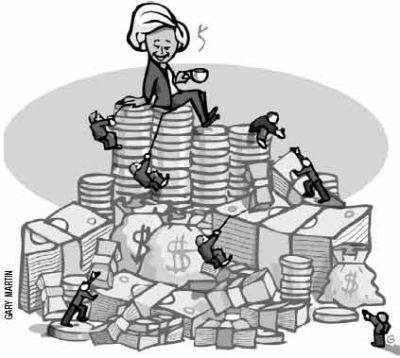 Hillary Clinton is neither a lesbian witch nor a feminist heroine. Like her husband, she’s an ambitious yuppie corporate lawyer.
Whatever principles she has probably stem from that. And whatever principles she has are far overshadowed by her market positioning, in which she constantly calculates stances that pay lip service to the desires of Democratic voters, please the party’s financial backers, and occasionally pander to Republicans.
Her entry into the presidential race does not bode well for the idea that 2008 might be the year in which a strong grassroots movement could swing the Democratic party to advocate getting out of Iraq, rebuilding New Orleans and the Gulf Coast, developing serious alternativeenergy and national health programs, and reversing the Reaganomic-corporate assault on working people. Specifically, her decision to forego public financing for her campaign and rely entirely on massive private donations is likely to accelerate the trends that have made it difficult for grassroots movements – or even primary voters – to influence who the nominee is.

In the 1960s, the expansion of the primaries and the decline of political machines democratized the presidential nominating process. In 1960, John F. Kennedy got the Democratic nod by proving that a Boston Catholic could win in Wisconsin and West Virginia; in 1968, antiwar candidate Eugene McCarthy’s near-victory in the New Hampshire primary convinced Lyndon Johnson not to seek re-election.

The conservative grassroots movement won the climactic California primary and the Republican nomination for Barry Goldwater in 1964, and the antiwar movement did the same for Democrat George McGovern in 1972.

In the last 20 years, however, the skyrocketing costs of campaigning and the “front-loading” of the nomination process have meant that the race has often been effectively over by the middle of March. And when the campaign begins more than a year before the first primary, power shifts from voters and activists to financiers and the “Washington consensus,” the nexus of money, media and power that anoints the front-runners, separating the “serious” from the “fringe” candidates based on who’s amassed the most funds and who possesses the intangibles of establishmentarian credibility. In 2004, Howard Dean, the Democrat who attracted most of the antiwar movement’s electoral energy, was doomed before a single actual vote was cast. The Beltway world deemed him demented after the repeated airings of his terminally unfunky attempt to rouse a crowd of supporters dejected by his loss in the Iowa caucuses.

What this means is that in a country where a majority of voters would probably endorse getting out of Iraq and spending the money in New Orleans, we’ll likely spend the next 22 months hearing a lot of tough-sounding mush about “phased redeployment” – and nothing about stopping the planned demolition of New Orleans’ housing projects.
Love Hillary or hate her? The most commonly heard opinions about her come more from the psychological projections of celebrity image politics than from reality. Lots of left-liberal women waltzed around in 1992 sporting “Elect Hillary’s Husband” buttons simply because after 12 years of Nancy Reagan and Barbara Bush, here was a candidate’s wife with a career and opinions of her own. For the same reason, the far right has painted her as a satanic harpy, sitting with Janet Reno by the lesbian coven’s bonfire roasting fetuses like marshmallows.
If there is anything satanic about Hillary Clinton’s presidential campaign, it’s Rupert Murdoch’s not-so-tacit support; he held a fundraiser for her last year, and the New York Post has become surprisingly kind to her. Criticizing Hillary for this is considered left-liberal purist paranoia, but there’s a reason for it. Measured by the global wattage of his intentions and power, Murdoch is the most evil figure in the media world, with his metastasizing-tumor greed and willingness to turn any outlet he owns into a spewer of far-right propaganda. Witness Fox News’ broadcasting of the dubious allegation that Barack Obama had attended an Islamic-fanatic madrassa in Indonesia as a child. When a CNN reporter went to Indonesia and found that it actually was a public elementary school, a Fox pundit wondered if he’d seen the kids “in any terrorist training camps.” (Any knowledge of recent Muslim history would reveal that there wasn’t much of a jihadist movement when Obama was in second grade.)
Murdoch is probably betting that 2008 will be a Democratic year, so he wants a candidate he can work with. If he can’t get a Margaret Thatcher, he’ll take a Tony Blair; Murdoch’s Sun, his British flagship paper, endorsed Blair for prime minister in the 1997, 2001 and 2005 elections. Blair, as Bill Clinton did with Ronald Reagan, left Thatcher’s domestic depredations largely intact, ameliorating a few and intensifying others. And John Lydon has provided the best description to date of Blair’s role in Iraq: “Bush’s poodle.”