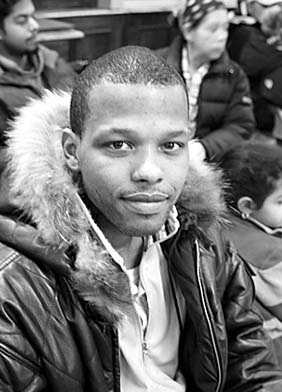 Julio Slavik who had his taxes prepared at the LESPFCU this year, waits to be called back for a final review of his forms. Photo: Antrim Caskey
Every year, low-income New Yorkers lose millions of dollars to predatory tax-refund preparation and loan companies. Loan fees and preparation costs, charged by some of the nation’s leading accounting firms stripped nearly $60 million dollars from low-income New Yorkers’ tax refund checks in 2005.

At the Lower East Side People’s Federal Credit Union (LESFPCU), however, the lobby is packed with successful filers leaving with their tax burden lifted. This is just one of dozens of community organizations in the city that offer free tax preparation (see sidebar for a partial list).

“These people are nice. The difference is they are not taking money, [the other firms] are taking money,” said Hosna A. Begum, a 58-year-old Bangladesh native and second-year participant. Begum is a professional nurse, but needs a license to practice in the United States, so she works as a cashier at Duane Reade. She will put the money she saves by using this service, which she estimates to be between $100 and $200, into a savings account for her 19-year-old daughter’s college education.

The credit union has provided this Internal Revenue Service (IRS)-approved service for five years now. To qualify, single filers must have a maximum annual income of $20,000 or $40,000 for households of more than one person. There are no residency requirements. The credit union opens accounts for filers immediately, free of charge, so that they can opt to receive their refunds through direct deposit. The credit union also provides an alternative to the more standard refund anticipation loan provided by larger tax agencies and waits until the refund is approved, to assure that the amount lent equals the refund.

Julio Slavik, a former employee of New York City Parks and Recreation, is here for the third year in a row. “The service is simple and not time consuming… and [the union] has a community feel.” He holds an account here, a relationship that started when he heard about the tax service through his mother.

According to Van Harte, each filer with the union “is saving about $150, and that’s a conservative estimate.” Last year, the union filed for 1,085 participants. That means the LESPFCU rerouted at least $162,750 back to the earners.

Sessions are staffed by credit union employees, volunteers and some workers compensated through stipends. “The employees are valuable and we need them, but we love our volunteers,” says Van Harte. “They have so much passion. They’re just as critical as the paid staff.”

Cherise Washington, who is an employee of the LESPFCU, has worked in tax preparation for seven years and is a former employee of Jackson Hewitt. “When people realize how much they have to pay [at Jackson Hewitt], they don’t want to,” says Washington.

“People are more friendly [here] because they don’t have to pay,” said Washington.

“It’s the same service, just here you’re not getting ripped off,” said Jennifer Stella, a 27- year-old receptionist from Queens who used to have her taxes prepared by H&R Block.

Participation has grown steadily each year as people return and spread the word. “I give people the address and tell them to come here,” says Begum. “The people are nice and you get the same money.”