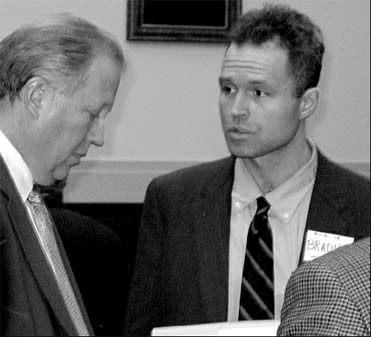 Assistant Secretary of the U.S. Department of State Thomas Shannon (left) listens to Harry Bubbins from Friends of Brad Will. PHOTO: Friends Of Brad Will

The Friends of Brad Will traveled to Washington, D.C. March 1 to press Congress and the State Department for a full investigation into the death of the former NYC Indymedia videographer who was gunned down in October while covering protests in the southern Mexican state of Oaxaca.

Will’s supporters met with members of the Congressional subcommittee that guides American policy in Central and Latin America, and spoke directly to Thomas A. Shannon, Jr. Assistant Secretary of State for Western Hemisphere Affairs.

During Shannon’s appearance before the subcommittee, Rep. Gregory Meeks (D-N.Y.) made a point of inquiring about the status of the investigation into Will’s death. Shannon said he would look into the matter.

“We are encouraged by our reception on Capitol Hill and the great interest in the Brad Will case, following the recent visit by the Will family here,” said Robert Jereski of Friends of Brad Will. “It is imperative that we build on this momentum and continue to contact our representatives in Washington DC from both sides of the aisle.”

Will’s friend Harry Bubbins added, “Justice is sometimes not swift, Now we have a unique opening to shine the spotlight from Washington DC to Oaxaca, Mexico, which is what Brad was interested in.”

This article was adapted from a report on nyc.indymedia.org.