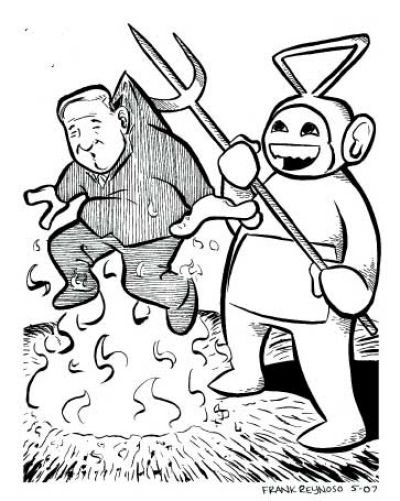 What transformed the Christian Right from a bunch of lunatic clowns who thought the name of the band Kiss stood for “Kids in Satan’s Service” to a powerful bloc in the Republican Party? The Rev. Jerry Falwell, who died May 15 at the age of 73, symbolized that change, when his self-styled “Moral Majority” emerged as a key force behind the election of Ronald Reagan.

The movement didn’t burst out of nowhere in 1980. The current Christian right has its roots in the early 1960s, when the likes of the Revs. Fred Schwarz and Billy James Hargis preached a crusade of rabid anti-Communism, puritanical morality, and ludicrous conspiracy theories. (Hargis, who denounced rock music as Communist brainwashing, fell to a sex scandal in 1974, when two of his students got married and confessed that they’d each done him.)

Falwell, however, came up when things were riper for his movement. The cultural radicalism of the 1960s made massive changes in people’s daily lives in the 1970s, with women demanding their rights in everything from careers to sexuality. The nation’s oral majority didn’t want to go back to the days when college women could only receive male visitors on Sunday afternoons with the door open, and gays and lesbians cowered in shame instead of strutting down Christopher and Castro streets, but that only encouraged the fundamentalist church to try to put the chastity belt back on society. It moved away from spiritual isolationism and into politics, and television and direct mail became powerful tools for getting and maintaining a following. Falwell’s Lynchburg, Virginia, megachurch and “Old-Time Gospel Hour” on cable TV were the movement’s best-known epicenters.

The new version of the Christian right did adapt to the post-1960s climate in two crucial ways. The old version — including Falwell —was openly segregationist, but the new one paraded its Black supporters and instead made gays, lesbians and women seeking abortions for “convenience” Public Enemy no.

It was also fiercely pro-Zionist — though its leaders would periodically blurt embarrassing utterances such as “God Almighty does not hear the prayer of a Jew.” And it preached a peculiarly materialistic version of Christianity.

Falwell didn’t get caught in the 1987-88 sex scandals that ensnared his colleagues Jim Bakker and oral-sex foe Jimmy Swaggart — who, in an oddly Clintonesque twist, didn’t actually have intercourse with a prostitute, but merely paid her to pose nude while he masturbated — but they discredited the Christian Right enough to hurt his career. When it revived in the 1990s, other leaders were more prominent: child-abuse advocate James Dobson, conspiracy theorist Pat Robertson, apocalypse promoter Tim LaHaye and methsnorting closet case Ted Haggard.

Falwell didn’t disappear, though. In the mid-1990s, he was peddling videos accusing President Clinton of orchestrating multiple murders; in 1999, he accused Teletubbies cartoon character Tinky Winky of being gay, and after the 9/11 attacks, he proclaimed that “the pagans, and the abortionists, and the feminists, and the gays and the lesbians” had “helped this happen.”

In a time when daily life runs on computer and mobile-phone technology imagined only in science fiction a generation ago, why are we still arguing about teaching evolution in public schools? The Rev. Jerry Falwell was one big reason.