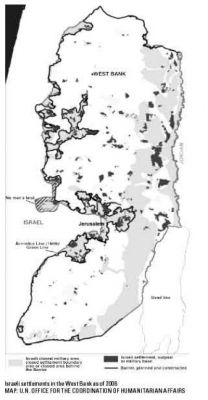 A just and workable two-state solution to the Israel-Palestine conflict appears dead — or will be if the current Livni-Rice “peace initiative,” little noticed by the press, succeeds.

Over the past 40 years, Israel has laid a thick and irreversible “Matrix of Control” over the Occupied Territories, including some 300 Israeli settlements, effectively eliminating the possibility of a viable Palestinian state.

Because of this, no Israeli politician can be elected on the basis of withdrawing from the Occupied Territories to a point where a real Palestinian state could actually emerge.

Israel has historically enjoyed unconditional bipartisan support in Congress and from the White House. This is reinforced by the Christian Right, the influential Jewish community and military lobbyists.

Now, if the two-state solution is gone, the logical alternative is a one-state solution, particularly since Israel conceives of the entire country between the Mediterranean and the Jordan River as one country — the Land of Israel — and has de facto made it one country through its settlements and highways.

Seeing that Israel has been the only effective government throughout the land these past 40 years, why not go all the way and declare it a democratic state of all its inhabitants? (After all, Israel claims to be the only democracy in the Middle East.) The answer is clear: A democratic state in the Land of Israel is unacceptable (to Israel) because such a state, with a Palestinian majority, could not be “Jewish.”

This leads us back, then, to apartheid, a system in which one population separates itself from another and then proceeds to dominate it permanently and structurally. Because the dominant group seeks control of the entire country but wants to get the unwanted population off its hands, it rules them indirectly by means of a bantustan, a kind of prison-state.

This is precisely what emerges from the “convergence plan” Israeli Prime Minister Ehud Olmert laid out to a joint session of Congress last May, and precisely what U.S. Secretary of State Condoleezza Rice and Israel’s Foreign Minister Tzipi Livni have been working on during Rice’s current monthly visits to the region.

The plan embodies the worst nightmare of the Palestinians. Phase II of the “Road Map” presents the “option” of an independent Palestinian state with provisional borders, “as a way station to a permanent status settlement.” Livni is publicly pushing for Phase II to replace Phase I, raising Palestinian fears of being frozen in limbo between occupation and a “provisional” state with no borders, no sovereignty, no viable economy, surrounded, fragmented and controlled by Israel and its ever-expanding settlements.

How can this be done? The answer lies in a little-noticed but fundamental change in U.S. policy, announced by President Bush in April 2004 and ratified almost unanimously by both houses of Congress.

“In light of new realities on the ground, including already existing major Israeli population centers [which is what the Bush Administration calls Israel’s massive settlement blocs],” he stated, “it is unrealistic to expect that the outcome of final status negotiations will be a full and complete return to the armistice lines of 1949.”

In one fell swoop, Bush fatally undercut the very basis of international diplomacy toward resolving the Israel-Palestine con-flict, including his own Road Map: the withdrawal of Israel to the 1967 (1949) borders to make space for a genuine Palestinian state.

Israel claims that settlement building within these blocs does not violate the Road Map because the United States has unilaterally recognized that territory as belonging permanently to Israel. In this way, between 15 and 25 percent of the West Bank has been removed from negotiations and annexed de facto to Israel, while the “occupied territories” have been redefined as only that area outside the settlement blocs — and that to be negotiated and “compromised.”

All this contradicts the Road Map, which clearly calls for a negotiated end to the occupation and the conflict.

In order to get around the conflict between unilateralism and negotiations, both Bush and British Prime Minister Tony Blair have told Olmert that he would have to go through the motions of negotiating with Palestinian National Authority President Mahmoud Abbas for a year, after which the “provisional” Palestinian state may be declared.
Hence, the occasional meeting Olmert has had with Abbas in which, Olmert admits, “We will not discuss the core issues of the conflict — the issue of (Palestinian) refugees, Jerusalem and borders.”

Here is where Livni’s idea of substituting Phase II for Phase I comes in. After the year is over (in May 2007) and it is clear that the Palestinians have not been “forthcoming,” Israel will be allowed to declare the route of the Separation Barrier its “provisional” border, thus annexing approximately 10 percent of the West Bank.

That may not sound like much, but it incorporates into Israel the major settlement blocs (plus a half-million Israeli settlers) while carving the West Bank into a number of small, disconnected and impoverished “cantons.”

It removes from the Palestinians their richest agricultural land and all their water. It also creates a “greater” Israeli Jerusalem over the entire central portion of the West Bank, thereby cutting the economic, cultural, religious and historic heart out of any Palestinian state. It then sandwiches the Palestinians between the Barrier/border and yet another “security” border, the Jordan Valley, giving Israel two eastern borders.

This prevents movement of people and goods into both Israel and Jordan, but also internally, between the various cantons. Israel also retains control of Palestinian airspace, the electromagnetic sphere and even the ability of the Palestinian state to conduct its own foreign policy.

In that way the Palestinians get their state, albeit with “provisional borders,” Israel expands onto 82 to 85 percent of the country while still conforming to the Road Map and apartheid — in the guise of a “two-state solution” — becomes political reality. And that’s where we stay forever. Bush, Blair and Olmert, together with Rice and Livni, appear to believe, with most Israelis, that military pressure, economic sanctions and daily hardship can compel the Palestinians to accept a truncated, semisovereign, non-viable mini-state. And the international community can be placated by a “sweetening of the pudding” — giving the Palestinians 90 percent of the Occupied Territories, for example, even though all the resources, sovereignty and developmental potential would be in the 10 percent Israel retains. Who, after all, really cares about a “viable” Palestinian state?”

The two-state solution is gone or rapidly receding, while a new apartheid regime is at the door. Only insistence on three indispensable elements may yet save the twostate solution: First, the Palestinians must obtain Gaza, 85 to 90 percent of the West Bank in a coheren form (including its water resources) and an extra-territorial land connection between them; second, they must have unsupervised borders with Arab states (the Jordan Valley and the Rafah crossing into Egypt from Gaza), plus unrestricted seaports and airports; and third, a shared Jerusalem must be an integral part of a Palestinian state with free and unrestricted access.

The Livni-Rice plan, proceeding quietly under the radar, is liable to be the last fatal blow to a just peace in Israel/Palestine. It is time to consider a new, full-blown antiapartheid movement.

Jeff Halper is the coordinator of the Israeli Committee Against House Demolitions and a candidate, with the Palestinian peace activist Ghassan Andoni, for the 2006 Nobel
Peace Prize. He can be reached at jeff@icahd.org.

Image: Israeli settlements in the West Bank as of 2006
MAP: U.N. OFFICE FOR THE COORDINATION OF HUMANITARIAN AFFAIRS