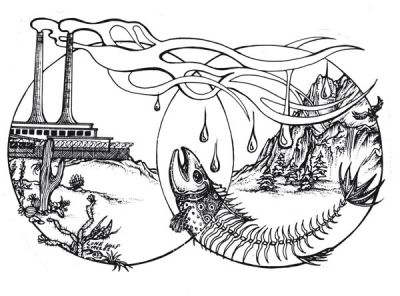 “The goal is clearly to save the climate — but only if capitalism can be fully preserved at the same time.”

During the last year the global warming debate has reached a turning point.
Due to the media hype surrounding Al Gore’s film An Inconvenient Truth, followed by a new assessment by the U.N. Intergovernmental Panel on Climate Change (IPCC), the climate skeptics have suffered a major defeat. Suddenly the media and the public are awakening to what the scientific consensus has been saying for two decades on human-induced climate change and the dangers it poses to the future of life on earth. Proposed solutions to global warming are popping up everywhere, from the current biofuels panacea to geoengineering solutions such as pumping sulfur particles into the stratosphere to shade the earth from the sun to claims that a market in carbon dioxide emissions is the invisible hand that will save the world. “Let’s quit the debate about whether greenhouse gases are caused by mankind or by natural causes,” President Bush said in a hastily organized retreat. “Let’s just focus on technologies that deal with the issue.”

It is characteristic of the magic-bullet solutions that now pervade the media that they promise to defend our current way of life while remaining virtually cost free. Despite the fact that economists have long insisted that there is no such thing as a free lunch, we are now being told on every side — even by Gore — that where global warming is concerned there is a free lunch after all. We can have our cars, our industrial waste, our endlessly expanding commodity economy and climate stability too. Even the IPCC, in its policy proposals, tells us that climate change can be stopped on the cheap — if only the magic of technology and markets is applied.

The goal is clearly to save the planet — but only if capitalism can be fully preserved at the same time.

Hence, the most prominent proposals are shaped by the fact that they are designed to fit within the capitalist box. There can be no disruption of existing class or power relations. All proposed solutions must be compatible with the treadmill of production.

Even progressive thinkers such as George Monbiot in his new book Heat: How to Stop the Planet Burning have gotten into the act. Monbiot pointedly tells us that the rich countries can solve the global warming problem without becoming “Third World” states or shaking up “middle-class” life —or indeed interfering with the distribution of riches at all. Politics is carefully excluded from his analysis, which instead focuses on such things as more buses, better insulated homes, virtual work, virtual shopping and improved cement. Corporations, we are led to believe, are part of the solution, not part of the problem. Less progressive, more technocratic thinkers look for substitutes for hydrocarbons, such as biofuels or even nuclear power, or they talk of floating white plastic islands in the oceans (a geoengineering solution to replace the lost reflectivity due to melting ice).

The dominant answers to global warming thus amount to what might be thought of as a new declaration of war on nature. If nature has “struck back” at capitalism’s degradation of the environment in the form of climate change, the answer is to unleash a more powerful array of technological and market innovations so that the system can continue to expand as before.

As Hannah Arendt, one of the leading political philosophers of the 20th century, explained:

The ecological irrationality of this response is evident in the tendency to dissociate global warming from the global environmental crisis as a whole, which includes such problems as species extinction, destruction of the oceans, tropical deforestation, desertification, toxic wastes, etc.

It is then possible, from this narrow perspective, to promote biofuels as a partial solution to global warming — without acknowledging that this will accelerate world hunger. Or it is thought pragmatic to dump iron filings in the ocean (the so-called Geritol solution to global warming) in order to grow phytoplankton and increase the carbon absorbing capacity of the ocean — without connecting this at all to the current oceanic catastrophe. The fact that the biosphere is one interconnected whole is downplayed in favor of mere economic expediency.

What all of this suggests is that a real solution to the planetary environmental crisis cannot be accomplished simply through new technologies or through turning nature into a market. It is necessary to go to the root of the problem by addressing the social relations of production.

We must recognize that today’s ecological problems are related to a system of global inequality that demands ecological destruction as a necessary condition of its existence. New social and democratic solutions need to be developed and rooted in human community and sustainability, embodying principles of conservation that are essential to life. But this means stepping outside the capitalist box and making peace with the planet — and with other human beings.

John Bellamy Foster is a professor of sociology at the University of Oregon in Eugene, and editor of Monthly Review. He is the author of numerous books, including Ecology Against Capitalism.