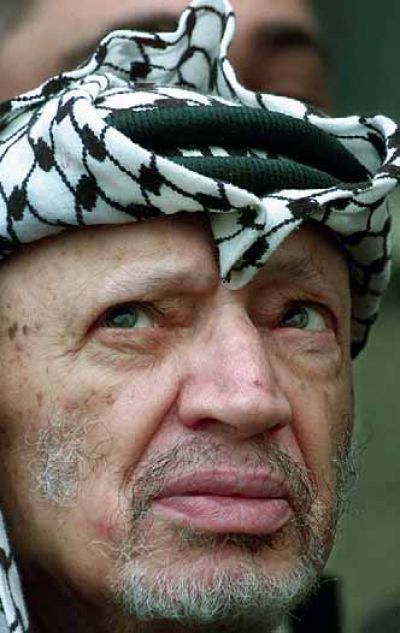 1959: Fatah Founded
Fatah is founded by members of the Palestinian diaspora, mostly educated professionals living and working in Gulf States. The group espouses a national-liberation ideology.

1965-1993: War Against Israel
The PLO conducts thousands of attacks against Israeli targets mainly in the Middle East.

1987-1993: First Intifada
The first mass Palestinian uprising against Israeli rule begins in the Jenin refugee camp and quickly spreads. Major tactics in the uprising include the throwing of stones, general strikes, boycotts of Israeli products, barricades and, later, the use of Molotov cocktails and grenades.

1987: Hamas Founded
Sheik Ahmed Yassin of the Gaza wing of the Muslim Brotherhood founds Hamas (“The Islamic Resistance Movement”) According to the Israeli weekly Koteret Rashit and UPI, the Islamic associations that incubated Hamas were supported by Mossad throughout the 1980’s, as a “counterbalance to the Palestine Liberation Organization.”

1993-2000: The Oslo “Peace Process”
Arafat signs the Declaration of Principles with Israel, launching what becomes known as the “Oslo Peace Process.” Hamas denounces the Oslo Accords, calling them a “betrayal of God’s will.”

2000-present: Second Intifada
The al-Aqsa Intifada erupts, following soonto-be Israeli Prime Minister Ariel Sharon’s bellicose visit to the Temple Mount in Jerusalem. After thousands of Palestinians are killed and wounded in protests, Hamas and Fatah begin a campaign of suicide attacks in Israel. In 2002, Israel re-invades the West Bank.
2004: “Ten Year Truce” Offered
Hamas officials offer a 10-year truce in exchange for a complete withdrawal by Israel from the territories captured in the Six Day War, and the establishment of a Palestinian state.
2005: Unilateral Withdrawal
Israel withdraws from the Gaza Strip.
2006: Hamas Election Victory
Buoyed by its wide network of social programs and a growing disgust with Fatah’s corruption, Hamas wins a stunning victory in U.S.-backed Palestinian parliamentary elections. Hamas takes 76 of the 132 seats. The ruling Fatah party takes 43.

2006: Hamas Isolated
Following the outcome of elections they themselves endorsed, Israel and the United States isolate the victors. The United States shuns all contact with Hamas and cuts off world-wide banking for the Palestinians, while Israel withholds the $50 million a month it collects in Palestinian taxes. At the same time the U.S. pledges to “support” Palestinian President Mahmoud Abbas.

2006-2007: Growing Signs of Civil War
Amid signs of an approaching Palestinian civil war, the United States begins to provide arms and equipment to Fatah, funneled largely through Mohammed Dahlan.

2007: Unity Government
Under intense pressure from Saudi Arabia, Hamas and Fatah form a “unity government” in the spring of 2007. Hani Kawasmeh, a political neophyte, is named as the compromise Interior Minister, but quickly resigns. President Abbas appoints Mohammed Dahlan as National Security Advisor, to the great consternation of Hamas.