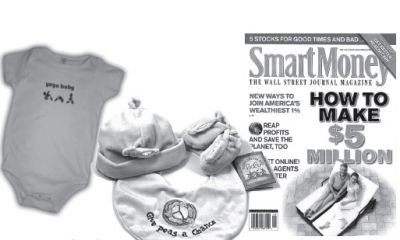 Once prescribed as the remedy for a bad day at work, shopping is now touted as the cure for global warming. Worried about your large carbon footprint? the New York Times recently did a feature on the greenest luxury condos. Concerned about junior’s garments? Plenty, a magazine devoted to green living, offers up new eco-baby gear made of organic cottons and non-toxic plastics.

Shopping is not the only way to save the planet, apparently. Wall Street is in on the act, advising that there’s a lot of green to be made by going “green.” SmartMoney magazine gives you tips on how to “Reap Profits and Save the Planet Too.”

Want to make a buck on massive droughts brought on by global warming? Invest in Monsanto, the leader in developing drought resistant crops like corn. Wondering where to buy a second home as the earth heats up? The Atlantic Monthly suggests buying property in southern Canada.

It’s not hard to see why the corporate media is addicted to shopping. Some two-thirds of the U.S. economy is a consumer economy — homes, cars, apparel, food, electronics, tourism and more. And none of these publications could exist without creating a hospitable audience for advertisers.

But this is one mess we can’t shop (or invest) our way out of. “You can’t solve the problems created by mass consumption with more consumption,” says Heather Rogers, filmmaker and author of Gone Tomorrow, The Secret Life of Garbage

“You shouldn’t confuse consumerism with political engagement,” adds Rogers. “True engagement allows a more complex relationship with the world around you, whereas the idea of voting with the dollar simplifies and limits that relationship.” The idea that we can buy our way out of this environmental and economic mess keeps us locked into a capitalist framework in which consumption and production result in more and more environmental devastation and degradation.

“Economic growth is incompatible with environmental protection, national security and international stability,” says Brian Czech, who holds a Ph.D. in biology and is president of the Center for the Advancement of a Steady State Economy.

In his book, Shoveling Fuel for a Runaway Train, Czech describes the epiphany that “a dollar spent is a dollar burned” while working at an elk preserve for the San Carlos Apache Tribe in Arizona.

As Director of the Recreation and Wildlife Department, Czech would auction off prime elk hunting licenses, or tags, to game hunters. Three tags went for $43,000 each, with funds going toward improving the elk habitat. Two tags were bought by Aaron Jones, a “trophy hunter” and owner of the largest sawmill in Oregon, specializing in oldgrowth timber.

Czech saw that “the improvements we did to the elk habitat were a drop in the bucket compared with the habitat devastation that was required to produce the money.” A similar situation exists for carbon trading, a $40 billion market today. The idea is that greenhouse gases can be cut by allowing one polluter that comes in under quota for carbon dioxide emissions to sell a permit allowing a coal-fired power plant, for example, to pollute more than its quota.

Never mind that there is little evidence this works and emissions keep on rising every year. According to the financial news website marketwatch.com, Wall Street’s biggest investment banks like J.P. Morgan are lining up to get in on a market that they estimate will be worth $3 trillion in 20 years — the size of all energy markets combined today. The potential profits are enormous. Even if you were able to make money from reducing greenhouse gases, as Doug Henwood, editor of the economics newsletter Left Business Observer, recently wrote in The Nation, the money could still be spent on goods that further deplete natural resources. In essence, the money is dirtier than the emissions themselves.

This is not to say that choices don’t matter. We can’t shop our way to a greener planet, but we can consciously choose to use much less. Czech says, “There needs to be a major movement in the consumption ethos in the United States that goes all the way to the most conspicuous of consumers.”

The problem, he observes, is that even if many people choose to engage in conservation, it can be cancelled out by one conspicuous consumer purchasing “a Hummer or the contracting of a mansion.” Rogers believes that “to truly address environmental crisis we need an economic system that does not rely on the exploitation of nature, which is a system that is not based on the accumulation of wealth.”

Individual solutions can be found in movements like the Church of Stop Shopping and freeganism, the growing trend of eating local, organic and vegetarian, phasing out toxic cleaning products, and going vintage versus going to the mall.

For instance, if you do need new baby clothes, the best choice for the planet is to attire your tot in hand-me-downs — found in abundance as children usually outgrow rather than wear out their clothes. Even the greenest organic cotton jammies suck up more resources to produce than the gently worn and cheaper counterpart found at a clothing swap.

The popularity and profitability of green trends point toward changing cultural attitudes and indicate a widespread desire for change.

Rogers offers, “Many people understand from their direct experience that the current mass production and consumption system is incredibly wasteful, they see it every day. There is a lot of room between how we consume today, and the notion of some bleak aesthetic. So it is not unrealistic to think we can devise empowering, creative ways to solve these problems.”