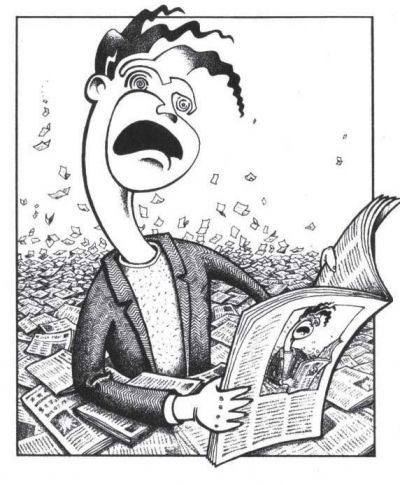 This spring a rash of articles, special reports and magazine cover stories finally acknowledged, without qualification, the existence of man-made climate change. Four glossy magazines — Outside, Elle, Vanity Fair and Fortune — all featured global warming cover stories in April alone. More than a dozen publications have run special stories on the causes and consequences in the past year.

It’s a marked departure for the corporate press. Since the early 1990s, the media have presented human-caused global warming as an issue with two sides, despite an enormous and growing body of scientific evidence all pointing to the same conclusion: that the earth was warming and human activity was responsible. The media’s coverage of global warming is a cautionary tale. The traditional principles of journalism — objectivity, balance, ideologically diverse sourcing — have become obstacles when it comes to honest reporting on scientific issues. And just as the corporate media botched reporting on the causes of global warming, they are likely to fail to report honestly on what it will take to stave off environmental disaster.

“The journalistic concept [of balance] causes problems when it is applied to issues of science,” write media researchers Jules and Maxwell Boykoff for Fairness and Accuracy in Reporting. “It seems to demand that journalists present competing points of view on a scientific question as though they had equal scientific weight, when they actually do not.” During the decade-long media debate over the existence and causes of global warming, many journalists tried to balance the mass consensus of thousands of peerreviewed scientists with dissenting views from fringe figures with little background in atmospheric physics but plenty of ties to energy companies (see page 9).

Analyzing 14 years of media coverage of global warming, the Boykoffs argue that elite U.S. newspapers “gave the impression that the scientific community was embroiled in a rip-roaring debate on whether or not humans were contributing to global warming.”

In fact, such debate only existed in the press itself. About 53 percent of the more than 3,000 articles collected by the researchers gave roughly equal attention to “both sides” of the global warming “controversy,” while only 35 percent accurately reflected the scholarly consensus that human activity was largely responsible for the changing climate.

While journalistic conventions are at the root of the media’s mishandling of the climate change, aggressive corporate P.R. strategies amplified these failings. In particular, the energy industry has recruited pliable scientists to parrot the anti-climate change viewpoint.

As the Columbia Journalism Review has noted, “In 1998, John H. Cushman, Jr., of the New York Times exposed an internal American Petroleum Institute memo outlining a strategy to invest millions to ‘maximize the impact of scientific views consistent with ours with Congress, the media and other key audiences.’”

The memo advocated recruiting and training scientists who did not have a long record of participation in the climate change debate in order to counter the scientific consensus. In the late 1990s, a group of these scientists, dubbed the “Carbon Club” by Jeremy Legget in his book Carbon War, began to be cited extensively in the mainstream press.

Now that media coverage of global warming has finally shifted from “balance” to a more accurate picture of consensus scientific views, can scientists and environmental activists breathe easier? Probably not. Although the media have, at long last, acknowledged the existence and causes of global warming, reporting on climate change “solutions” is most likely to be constrained by the media’s reliance on “indexing” that is, drawing the boundaries of acceptable opinion based on the differences between mainstream, elite sources.

In other words, elite newspapers and other media will probably pat themselves on the back for forcing politicians to deal with climate change, all the while reporting on battles between the Democrats and Republicans as the “two sides” to the global warming debate. So-called “liberal” newspapers like the New York Times are already pointing toward the Democratic Party’s July 4 “Declaration of Energy Independence” as a “watershed moment” in domestic policy battles over climate change. Internationally, the Bush administration’s vapid and nonsensical proposals on “updating” the Kyoto Protocol with a series of voluntary emissions cuts receive reams of coverage in the corporate press.

The possibility of a more radical perspective on climate change making it into the mainstream press is slim, at best. Beltway politicians, pundits and industry lobbying groups are likely to define the acceptable range of solutions to the global warming crisis for years to come. Meanwhile, the earth spirals toward disaster.
Illustration: RadicalGraphics.org