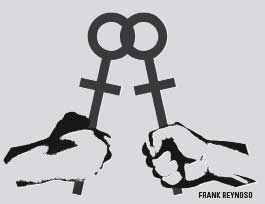 Supporters of four young African Americans lesbians are mobilizing after the women received prison sentences of 3½ to 11 years on June 14 for their role in fending off a male attacker.

The saga began on August 16, 2006 when the four women and three friends traveled from their homes in Newark, N.J. to the West Village where they were harassed by street vendor Dwayne Buckle, 29. Buckle landed in the hospital with a stab wound after verbally accosting the women, threatening “I’ll fuck you straight”, spitting in the face of one of the women and throwing a lit cigarette at the women. Patreese Johnson, 20, Venice Brown, 19, Terrain Dandridge, 20, and Renata Hill, 24, were sentenced by Judge Edward McGlaughlin after being convicted by a mostly-white jury.