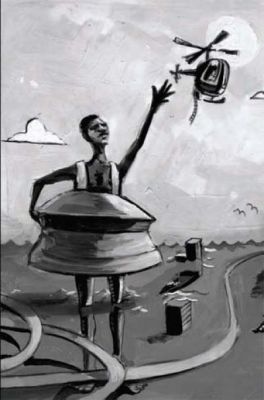 Dave Zirin begins his new book Welcome To The Terrordome in the hellish conditions of the New Orleans Superdome following Hurricane Katrina. But the story of the how the Superdome became the “terrordome” began well before then. Built in 1975 on the public dime, the Superdome was part of a massive slum clearance program that cleared out low-income residents who could not even afford tickets to New Orleans Saints football games.

Thirty years later, many of those low-income residents finally got something for their tax money when they took refuge in the dome after Katrina’s deadly sweep, in conditions that Jesse Jackson compared to “the hold of a slave ship.” After the Superdome’s hell became publicly untenable, the Bush administration shipped thousands of New Orleans residents to the Astrodome in Houston in what Zirin calls the “march of the domes.”

Zirin writes of various pro athletes donating money and a helping hand to the region in the weeks following Katrina. Later chapters dissect the racial tension evident in the use (and misuse) of hip-hop culture by the National Basketball Association (NBA). After decades of using the music, style and personalities of hip-hop in its marketing, the NBA now seeks to regulate the dress and conduct of its majority African- American players due to the league’s concern about alienating its white and corporate fan base.

Zirin uses the controversy around the idea of retiring Roberto Clemente’s jersey number (21) from all of major league baseball to explore larger societal tensions between African- Americans and Latinos and the prospects for greater Black-Brown unity. This honor is currently accorded only to Jackie Robinson (42), who broke baseball’s color barrier in 1947. Clemente, the first great Latino ballplayer to play in the big leagues and a passionate social justice champion, died near the peak of his career in 1972 while flying on an earthquake relief mission to Nicaragua. The suggestion that he deserves to be similarly recognized has rankled some of Robinson’s supporters.

Zirin runs into trouble, yet again, in defending San Francisco Giants slugger Barry Bonds. Zirin, adept at uncovering sports’ hidden history, nails baseball owners for turning a blind eye to steroid use because soaring home run totals brought out record numbers of fans. But he seems oblivious to legitimate steroid concerns and the public’s ambivalence towards Bonds likely breaking of Hank Aaron’s home run record of 755 dingers. For Zirin, Bonds is a player who has never tested positive for steroids and, in other essays, is bizarrely portrayed as an outspoken fighter for social justice.

A collection of essays, Welcome To The Terrordome could use better editing and cohesion. But for those fans who haven’t heard of Dave Zirin yet and want an alternative to the tabloidization of sports, his latest book is a must-read.