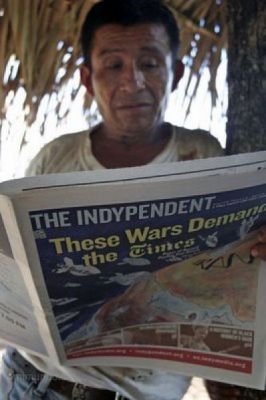 A community member reads The Indypendent’s coverage of the January events in which hundreds of people in El Estor, Izabal, Quatemala were evicted from their homes at gun point at the hands of a mining interests. His photo and story was featured in the article.

To read the stories behind this photo:
In English: Guatemalan Villages Face Globalization at Gunpoint  http://www.indypendent.org/?p=819