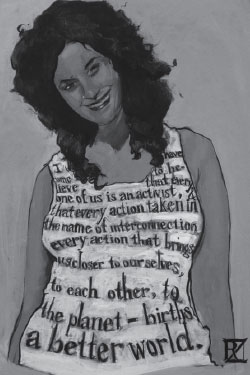 Loyal to the Sky: Notes from an Activist
By Marisa Handler
Berrett-Koehler Publishers, 2007

High mountains of Nepal, crowded buses in India, the jungles of Ecuador and the streets of San Francisco, Miami and New York always led Marisa Handler back to the same place — her troubled heart. Born into the anti-globalization generation, Handler has weaved in and out of the peace and justice movement most of her adult life, protesthopping from city to city like many 21st century activists. Amid these collective efforts, the Iraq War wages on and global imperial capitalism continues to destroy ecosystems and communities.

Loyal to the Sky is the fist on the table that quiets the room full of activists quarreling over what message to put on the sign or which route to take in the march. Shhhh. Can you hear the thumping of your heart, the feeling you get when you want to confront the police or sneer at the woman walking down the other side of the street?

We can be glad that Handler didn’t wait another couple decades before writing this memoir. With only thirty years under her belt, she speaks directly to those of us knocking our heads against the wall working for social and environmental change, feeling that with every step forward we end up three steps back.

Native to South Africa, Handler’s family fled to the United States in 1988 when she was eleven, escaping apartheid to live in, what she discovered later to be, a country of shattered dreams and hollow consumerism. A natural activist, Handler spoke out and organized throughout high school and college.  After a year spent studying in Jerusalem seeking her Jewish roots, she realized that the walls built to separate people are the same barriers constructed to divide and conquer our own hearts.

Activism, music and journalism led Handler around the world on a grand quest to pinpoint the root causes of suffering. While writing an article in 2003 on how the indigenous Sarayacu community in Ecuador’s southern Amazon were resisting major oil development, Handler noted how the anti-globalization movement could learn from the same people they were hoping to save in the streets of Seattle.  “The [Sarayacu] strategy shaping their campaign is grounded in their spirituality, wisdom and culture.  Stemming from a nonviolent vision of interconnection with the earth and humanity, their means are congruent with their ends.”

Handler holds herself accountable by looking within. “Corporate globalization is a highly convoluted form of escapism, a marathon race away from ourselves and each other … Until we stop running, until we pause and look at the violence within us, we will continue creating violence in the world. What we are facing is not simply a political or economic predicament. It is a spiritual crisis.”

Many activists kick away the meditation pillows and yoga mats with a fist in the air, demanding the right to be angry. Handler handles the subject well, describing how anger can fuel the compassion, truth and nonviolence needed to change the world. After time spent in India and subsequent years spent on selfevaluation, Handler often points to the lessons of Martin Luther King, Jr. and Mahatma Gandhi. “As human beings, our greatness lies not so much in being able to remake the world — that is the myth of the atomic age — as in being able to remake ourselves,” Gandhi said.

“I have come to believe that every one of us is an activist, and that every action taken in the name of our interconnection — every action that brings us closer to ourselves, to each other, to the planet — births a better world,” Handler concludes.  Loyal to the Sky challenges the activist community to take an honest look in the mirror. To listen to the voice inside. And then to raise hell in the most creative and compassionate way possible.

To hear Handler sing from page, check out her 2007 album Dark Spoke at marisahandler.com.