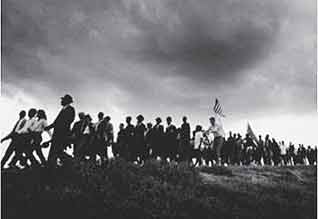 Two of the keenest American observers of events are Noam Chomsky and Howard Zinn. They are sane and sensible — admirable. They have spoken out and written for the past 40 years against U.S. aggressions, undeclared wars, covert actions, political corruption and unconstitutional decisions. Each has come forth with a new book — Chomsky’s Interventions and Zinn’s A Power Governments Cannot Suppress, both published by Lawrence Ferlinghetti’s City Lights Books and edited by Greg Ruggiero. Both volumes are made up of pieces written over the past several years.

The publication of Chomsky’s essays involves a remarkable circumstance, which Ruggiero relates in an editor’s note. The pieces were syndicated as op-eds under contract with the New York Times and picked up widely by the international press. None appeared in the Times itself, the Los Angeles Times, the Washington Post or the Boston Globe.

In those op-eds, Ruggiero comments, “Chomsky demonstrates that he can just as persuasively strike at the heart of today’s political contradictions, deceptions and hidden horrors with a few hundred words as he can with a few hundred pages.” The Chomsky pieces consider 9/11 — the lessons unlearned, the case against the war in Iraq, the Israeli-Palestinian “road to nowhere,” the United Nations and the routine use of the veto by the United States, Hiroshima and the present terror and other matters.

Zinn’s pieces range from Seattle, 1919 and 1999, to the forbidden word “class” to Afghanistan to Henry David Thoreau to “The Enemy Is War.” Zinn is more of an optimist at the moment than Chomsky. Zinn finds reason to be optimistic in the uncertainty of the future, the unpredictability of history. Chomsky warns that “Washington’s primary role in accelerating the race to destruction by extending its historically unique military dominance coupled with policies of aggressive militarism, both in word and in deed … are virtually an invitation to disaster.”

But the work of both Chomsky and Zinn is primarily history, based on events that were current at the time of their writing or on the historical record up to then. That is a limited approach. To write effectively about contemporary affairs, situations and dilemmas, it is imperative that the probable outcomes of current events be examined.

For example, Gen. David Petraeus and Ambassador Ryan Crocker are scheduled to submit their report on U.S. prospects in Iraq Sept.
15.

The difficulty is the report has already been set aside by the Bush administration.