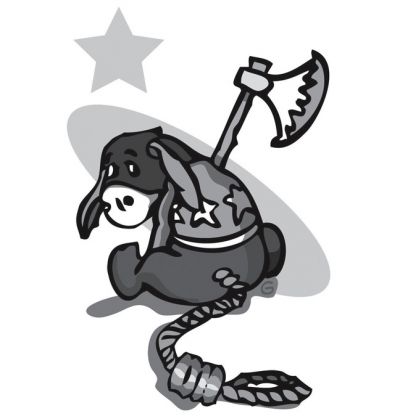 Illustration by Gary Martin
When presidential hopeful John Edwards scanned the audience at the start of his session at the YearlyKos Convention in July, one woman looked particularly eager. Presented with the rare opportunity to ask the Democratic candidate a tough question on his credentials for office, Judy from Portland had a more pressing concern.

“Is that your question?” Edwards asked, smiling.

It was. People clapped.

It was the perfect example of the candidates’ treatment at YearlyKos — that ballyhooed gathering of “progressive” bloggers, media mavens and political operatives who laud the “netroots” for their influence on electoral politics. That the leading Democratic candidates showed up at the conference at all was a source of ceaseless celebration — and most people were too busy reveling to confront them with hard questions. From the panel “debate” (during which audience members sang “Happy Birthday” to Barack Obama) to the individual breakout sessions (stocked with colorful candidate propaganda), the atmosphere was more pep rally than firing line.

But I had a question, and it wasn’t about cookies. I wanted to confront the candidates on the death penalty.

It didn’t matter which one. Quietly, but without exception, all the leading Democrats vying for the presidential nomination support capital punishment. Products of a political era that saw Michael Dukakis pilloried on the issue in 1988, the Democrats have aligned themselves with their rivals across the aisle. Third parties aside, the last four presidential elections have left voters with a choice of two death penalty supporters.

That this will be true in 2008 would be less surprising if it were not for the seismic shifts that have occurred with the death penalty. The past few years have seen the Supreme Court outlaw the execution of the mentally retarded and prisoners convicted as juveniles, while exonerations increase across the country and executions drop to historic lows. Lethal injection is under fire as being demonstrably cruel, and moratoriums have stalled the death machinery in several states.

Most recently, the U.S. attorneys scandal shed light on the Bush administration’s push to expand the federal death penalty over the objections of its own prosecutors. Despite all of this, discussion of the death penalty was off the table at YearlyKos, as it was in the major debates.

At the conference, many people were surprised to discover the candidates’ positions. “Even Obama?” was a common response. Yes, even Obama supports the death penalty in cases “so heinous … that the community is justified in expressing the full measure of its outrage,” as he wrote in his bestseller, The Audacity of Hope. It’s a disingenuous statement, designed to score political points. The communities most affected by violent crime are rarely the ones invited to “express their outrage.” Instead, they bear the brunt of the criminal justice system’s cruelest excesses.

I was not able to get near him, but I knew what I would have asked. “As a former community organizer on the South Side of Chicago, surely you are aware of the innocent black men who spent years on death row after being tortured by Chicago police into confessing to crimes they didn’t commit?” Hillary Clinton’s “breakout session” (read: campaign rally) was packed, tightly managed and stacked with fresh-faced campaign volunteers. My hand was ignored.

Not surprisingly, no one asked why the former First Lady had spent the mid-1990s lobbying for legislation that drastically expanded the number of crimes eligible for the federal death penalty while curbing death penalty appeals.

Then there was Edwards. More than any other candidate, his rhetoric that day reeked with hypocrisy when placed alongside his support for the death penalty. Calling the Democrats “the party of the people,” he repeatedly invoked poverty and torture; now he was listening to an atheist argue that his religious rhetoric was isolating America’s nonbelievers. In fact, Edwards replied soberly, more than anything, “morality” was central to his political vocabulary.

A few minutes later, he called on me.

At length and brimming with Clintonian empathy, Edwards responded. He plucked a trite hypothetical, “If a person … murders a five-year-old …” to a smattering of boos. “You don’t have to agree with me!” he exclaimed. When he was done, few people clapped.

Maybe the Dems do not want to talk about the death penalty, because in their hearts they know it is morally indefensible. More likely, they know that as long as no one holds them accountable, it is a political stance that costs them nothing. It’s their “soft on crime” trump card.

It is time to call this out. From the war to the domestic killing machine, the Democrats have proven themselves little more than a loyal opposition. As long as there are people facing execution across this country, there should be no more birthday serenades or cookie baking for political celebrities.

For the prisoners and their families, the stakes are too high.