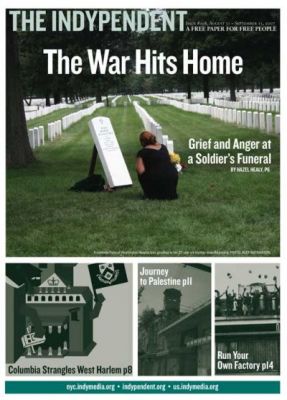 The article’s account of the auto shop’s eviction overlooks the rather important fact that the tenant who owned the business was many months behind in his rent. Columbia put up with this situation far longer than almost any other landlord. Additionally, it offered to lease the tenant a smaller space nearby, but the tenant refused. Other tenants in the building willingly sold their leaseholds to the university. The suggestion that the university forced out businesses that would otherwise have continued operating at that location is simply not true.—Columbia University alumnus

Author’s Response:
Some might say Columbia’s potential use of eminent domain, not-for-profit educational
Status and alleged “commitment to the community” means it owes more than to be as heartless as a private, for-profit landowner would be. That overdue rent, by the way, has been debated by the tenant and Columbia.

Columbia originally pushed all the tenants out for a long period of time because of a safety violation in the elevator, telling them this was temporary and leaving them with the impression that they could come back. The elevator was never fixed. Tenants say Columbia’s scaffolding, among other Columbia-caused issues, led to them losing money, which led to some overdue rent.
—Paul Schrodt

While I was pleased to see The Indypendent review Noam Chomsky’s Interventions and Howard Zinn’s A Power Governments Cannot Suppress (full disclosure: I was involved with both books), I want to correct a few errors in your article. Interventions is a collection of articles that were distributed by The New York Times Syndicate, not The New York Times. And while it is true that Chomsky is rarely featured in the U.S. corporate media, it is wrong to say that none of the articles in Interventions appeared in the Times. One, on the Israeli apartheid wall, did. But your reviewer makes a more substantive error in suggesting that, “neither Zinn nor Chomsky have caught up to” the “catastrophic situation” in Iraq, stressing, “Iraq is no Vietnam.
The United States will not accept a defeat in Iraq.” Chomsky takes up these very points in an essay in Interventions originally from January 30, 2007 (“What is at Stake in Iraq”): “No one should underestimate the force of the longstanding goal of U.S. foreign policy to sustain its control over” the Middle East’s “crucial resources.

Authentic Iraqi sovereignty will not easily be tolerated by the occupying power.” Zinn describes how Iraq must be seen in a larger imperial context: “The prospect is for a war without end. General Kimmitt, U.S. Central Command deputy director of plans and strategy, told BBC News in April 2006 that ‘[e]ven if Iraq stabilized tomorrow the Long War would continue.’”

Both describe in detail the human catastrophe in Iraq and politically what is at stake for U.S. imperialism, while also soberly assessing the opportunities that exist, and are required, for mobilizing to try to change the calculus of U.S. empire.
—Anthony Arnove, Arnove coedited Voices of a People’s History of the United States with Howard Zinn.

Author’s response: My review, third paragraph, states Chomsky’s pieces were “syndicated” by the Times. None appeared in the Times itself, as Greg Ruggiero writes (page vii) and I cite. Further, if Chomsky and Zinn themselves covered the events they interpret, they would be more directly, specifically and consistently articulate about where they are heading.

And further, they persist in thinking their criticism will have an effect; it will not.
—Donald Paneth, Indypendent Contributor