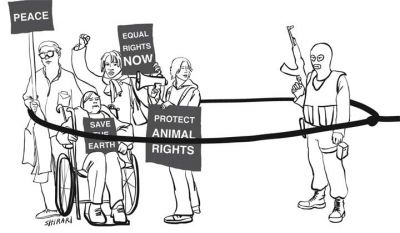 A disturbing trend is afoot. In the past few months, in two countries, governments have relied on broadly-worded terrorism laws to put down social protests.

Political demonstrators in El Salvador and London have found police deploying a new weapon against them: laws designed to prevent and punish terrorism. In the town of Suchitoto, El Salvador, during a mass demonstration in early July against a water decentralization plan, fourteen protesters were arrested and charged with terrorism.

At London’s Heathrow Airport in August, police relied on stop-and-search powers contained in a recent terrorism law to control a huge demonstration against global warming. A government document made public warned that police would employ their counterterrorism powers to deal “robustly” with any illegal protests.

But the police already have plenty of legal authority to arrest demonstrators who disrupt flight schedules or damage property; their use of counterterrorism legislation is sheer opportunism.

Political protesters are not terrorists, as police and prosecutors well know. Yet it seems that the broad authorities granted under recent counterterrorism laws are too tempting to resist. Why would state officials respect normal criminal law rules when they can instead employ laws that offer sweeping powers, few procedural safeguards and harsh penalties?

CONDUCT “GENUINELY OF A TERRORIST NATURE”

A United Nations counterterrorism expert recently discussed the question of defining conduct that is “genuinely of a terrorist nature.” He explained that the concept of terrorism should be understood to include only those acts committed “with the intention of causing death or serious bodily injury, or the taking of hostages,” and “for the purpose of provoking a state of terror, intimidating a population, or compelling a government or international organization to do or abstain from doing any act.”

“That an act is criminal,” he emphasized, “does not, by itself, make it a terrorist act.”

Few counterterrorism laws are as narrowly drawn as he and other experts recommend. Indeed, some of these laws are so broad that they easily cover political protests. They tend to cover a set of acts – not necessarily violent acts – requiring only that the acts be carried out for an enumerated, “terrorist” purpose.

Reading the terms of these laws, there is good reason to fear that acts of political dissent could wrongly be deemed terrorist in a number of countries. In Azerbaijan, for example, acts that inflict “significant damage to property,” or (an interesting catch-all category) cause “other socially dangerous consequences,” can be prosecuted as terrorist, as long as they are carried out with the goal of requiring state authorities to comply with the perpetrator’s demands. Other countries’ definitions are similarly broad.

Since social protest is almost always meant as a form of political pressure – that is, a means of compelling state authorities to change their policies – the purpose requirement of such counterterrorism laws will almost always be met. And so the possibility of arbitrary enforcement of such laws is very real.

With fears of terrorism high, many governments now have tough counterterrorism laws at their disposal. But while the extraordinary powers granted to police and other state authorities under these laws are publicly defended by reference to the threat of terrorism, some of the actual conduct they apply to has little connection to the problem.

Joanne Mariner is a human rights lawyer based in New York with Human Rights Watch. For more information about terrorism and counterterrorism legislation, visit hrw.org. This was excerpted from an article originally published by Infoshop News.