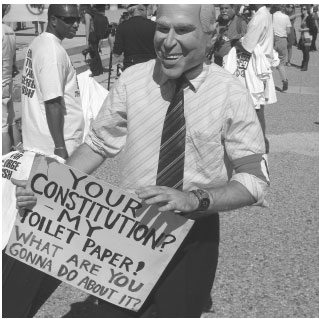 On Sept. 29 I went down with a few people to an antiwar demonstration in Washington, D.C. sponsored by the Troops Out Now Coalition (TO NC). Though I talked with a lot of people and had a good time, it also clarified a lot of my concerns about the direction of the antiwar movement.

The demonstration garnered considerably fewer participants than past marches, with at best 5,000 people in attendance. Yet the conversations I shared with several other activists centered not around the numbers, but more about what we were there to do.

Looking around, this question was accentuated by the some of the odd characters around us. A guy who resembled “Comic Book Guy” from The Simpsons kept droning on about Hubert Humphrey in ‘76. Another man with a permanent helmet and air traffic controller headset looked like he was evading a group home. There was a talkative fellow with a serious facial rash who was enthusiastic about a possible Sam Nunn presidential bid. And then there was the same Trot guy I always see, young, but getting a little older now, still hawking his papers and arguing his correct line.

On the Troops Out Now bus from New York, we were told how important the day was, but the speakers at the rally outside the Capital repeated the same old things while we called out the same old chants and got back the same old responses. Souvenir guys hawked protest t-shirts (dated Sept. 29!) just like at a serious basketball game or Disney World. Other than an extended detour on a lost bus, it was a protest like any other: speeches no one listened to, marching and chanting for two hours and requests for money.

On the bus back, a nice, well-intentioned bus captain talked about a new kind of movement. But, she passed out the same weathered copy of some paper that I always see and which I put down after reading only a few sentences of another re-tread article. There have been upwards of 20 “major” demonstrations in D.C. and countless other ones around the world, involving millions of people. What have we produced? A million dead in Iraq, years of war and a very real concern that the United States will attack Iran.

Speakers on a stage and marching in circles is not working and hasn’t been for some time. It is difficult to live in this time and place, but we have to get past these self-therapeutic rituals of illusory resistance. We say, “No Justice, No Peace,” and nobody asks what that really means. We have had no justice. Does “no peace” really mean shouting loudly on empty Saturday streets?

As I looked around the tired faces on the bus coming back, something crystallized. The 30 percent of the country who still likes Bush will like him no matter what: because he’s white, because they’re afraid, because they think bombing Iran will somehow keep everything holding on for that much longer. And these people will never stray.

They’re the ones at the pre-screened rallies, thanking him for all he’s doing. They’re politically like Terri Schiavo: there, but not. I’m a lefty and will be until I die. I think we can have a world of justice and freedom and that capitalism and its various sicknesses, man-made as they are, can be unwrought and a better society can be formed. I don’t think there is a liberal solution: we couldn’t reform our way out of the concentration camps and we can’t lobby our way past the death squads.

But, looking around the bus, I felt too much of a connection between Bush’s 30 percent, following blindly, and this antiwar moment, performing our anger, but resisting nothing. We owe it to ourselves to create a new strategy. Because this isn’t working.