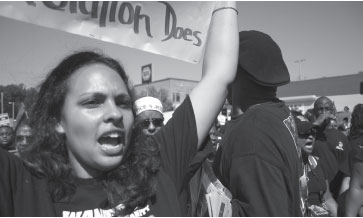 Jena, Louisiana — Six courageous families in this small town sent out a call for justice that has now been amplified around the world.

At 5:00 a.m. on Sept. 20, the buses were already arriving. A full bus from Chicago emptied out, some people brushing their teeth as they stepped into the slightly cold predawn air. They seemed exhausted, but also charged and energized. Next came buses from Baton Rouge, Los Angeles and Philadelphia. By 7:00 a.m., reports were coming in that hundreds of buses were lined up outside of town, some having been briefly prevented by Louisiana state police from entering. Meanwhile, hundreds of people, from cars, buses and motorcycles, were pouring into Jena, while many thousands more were gathering in the streets outside the Jena courthouse. As simultaneous rallies began in the two locations, thousands more streamed into the city. By 9:00 a.m., there were, by some estimates, up to 50,000 people in this town of 2,500. Almost every business in town was shut down, many roads were closed by police checkpoints and a sea of protest filled the city for miles.

This demonstration was not initiated by any one national organization, and there was little coordination among some of the major organizations involved.

This decentralization was beautiful, although sometimes chaotic. As thousands gathered at the NAACP-sponsored rally at the town ballfield, thousands more demonstrators marched from the courthouse to the Jena High School, and tens of thousands continued to arrive and fill the streets around downtown Jena. People seemed unconcerned about the lack of clarity, however, and marched on their own schedule, which gave the day a more democratic feel, unlike the more controlled and sometimes disempowering marches that some mainstream groups have organized in the past.

Participants ranged from children and teens at their first demonstration to civil rights movement veterans. Many people who had never before been to a demonstration ended up organizing a delegation or booking a bus for this journey.

While the vast majority of the white community of Jena chose to stay either indoors or out of town, hundreds of Black Jena residents proudly displayed their “Free The Jena Six” shirts and continued to gather in the ballfield hours after most out-of-town visitors had left. White activists from across the United States also largely stayed away from this historic event — perhaps one to three percent of the crowd was white. This silence indicates that the U.S. left is divided by race in many of the same ways this country is.

The Sept. 20 march, however, was not about division. It was a generational moment — the kind of watershed event that could signal a turning point. But what does the gigantic crowd in Jena mean? For some supporters, it felt like a deliverance from those months that the families stood alone — a moment where the world stood with them and the power structure backed down. It was also a moment for grass-roots independent media, who built this story and kept it alive until the 24-hour news channels could no longer ignore it. It was a moment for historically Black colleges and universities to shine. Student activists organized bus convoys — five or more buses arrived from many Southern schools — that were quickly filled by a broad range of students.

Perhaps that is where the power in the Jena Six demonstration lies; if this unfocused and uncontrolled anger can be directed towards real societal change, if outrages like Jena can finally bring about the conversation on race in this country that we were promised after Katrina, if this movement to support these six kids can show that we can unite for justice and win, then Jena will truly have been a victory.
If this happens, we can say that it all began with six families in Jena, Louisiana, who refused to stay silent.

Jordan Flaherty is an editor of Left Turn Magazine (leftturn.org). His May 9 article from Jena was one of the first to bring the case to a national audience.

ENOUGH IS ENOUGH: Lucero James of New York marches in the Jena 6 protest on Sept. 20. The
demonstration, which drew tens of thousands of people, was the largest civil rights protest in
several decades. PHOTO: ARABY SMITH