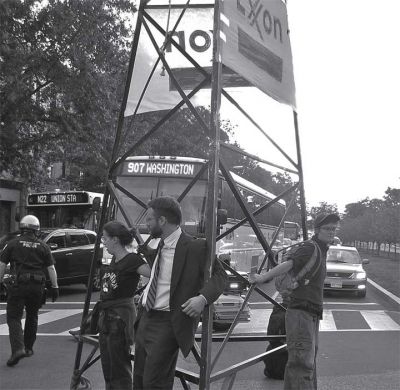 The Blackwater scandal has gotten plenty of media coverage, and it deserves a lot more. Taxpayer subsidies for private mercenaries are anti-thetical to democracy, and Blackwater’s actions in Iraq have often been murderous. But the scandal is unfolding in a U.S. media context that routinely turns criticisms of the war into demands for a better war.

Many politicians are aiding this alchemy. Rhetoric from a House committee early this month openly called for a better war at a highly publicized hearing that featured Erik Prince, the odious CEO of Blackwater USA.

A congressman from New Hampshire, Paul Hodes, insisted on the importance of knowing “whether failures to hold Blackwater personnel accountable for misconduct undermine our efforts in Iraq.” Another Democrat on the panel, Carolyn Maloney of New York, told Blackwater’s top exec that “your actions may be undermining our mission in Iraq and really hurting the relationship and trust between the Iraqi people and the American military.”

But the problem with Blackwater’s activities is not that they “undermine” the U.S. military’s “efforts” and “mission” in Iraq. The efforts and the mission shouldn’t exist.

A real hazard of preoccupations with Blackwater is that it will become a scapegoat for what is profoundly and fundamentally wrong with the U.S. effort and mission. Condemnation of Blackwater, however justified, can easily be syphoned into a political whirlpool that demands a cleanup of the U.S. war effort — as though a relentless war of occupation based on lies could be redeemed by better management, as if the occupying troops in Army and Marine uniforms are incarnations of restraint and accountability.

Midway through this month, the Associated Press reported that “U.S. and Iraqi officials are negotiating Baghdad’s demand that security company Blackwater USA be expelled from the country within six months, and American diplomats appear to be working on how to fill the security gap if the company is phased out.”
We can expect many such stories in the months ahead.

Meanwhile, we get extremely selective U.S. media coverage of key Pentagon operations. Bombs explode in remote areas, launched by high-tech U.S. weaponry, and few who scour the U.S. news pages and broadcasts are any the wiser about the human toll.

With all the media attention to sectarian violence in Iraq, the favorite motif of coverage is the suicide bombing that underscores the conflagration as Iraqi-on-Iraqi violence. U.S. reporters and commentators rarely touch on the U.S. occupation as perpetrator and catalyst of the carnage.

One of the most unusual aspects of the current Blackwater scandal is that it places recent killings of Iraqi civilians front and center, even though the killers were Americans. This angle is outside the customary media frame that focuses on what Iraqis are doing to each other and presents Americans — whether in military uniform or in contractor mode — as well meaning heroes who sometimes become victims of dire circumstances. Many members of Congress, like quite a few journalists, have hopped on the anti-Blackwater bandwagon with rhetoric that bemoans how the company is making it more difficult for the U.S. government to succeed in Iraq.

But the U.S. war effort has continued to deepen the horrors inside that country. And Washington’s priorities have clearly placed the value of oil way above the value of human life. So why should we want the U.S. government to succeed in Iraq? Unless the deadly arrogance of Blackwater and its financiers in the U.S. government is placed in a broader perspective on the U.S. war effort as a whole, the vilification of the firm could distract from challenging the overall presence of U.S. forces in Iraq and the air war that continues to escalate outside the U.S. media’s viewfinder.

The current Blackwater scandal should help us to understand the dynamics that routinely set in when occupiers — whether privatized mercenaries or uniformed soldier — rely on massive violence against the population they claim to be helping. Terrible as Blackwater has been and continues to be, that profiteering corporation should not be made a lightning rod for opposition to the war. New legislation that demands accountability from private security forces can’t make a war that’s wrong any more right. Finding better poster boys who can be touted as humanitarians rather than mercenaries won’t change the basic roles of gun-toting Americans in a country that they have no right to occupy.

PHOTO: Antiwar and enviromental activists, dressed up as Blackwater USA mercenaries and an oil company
executive, guard an oil rig prop in downtown Washington, D.C., temporarily delaying morning
traffic on Oct. 22. More than 60 people were arrested during the “No War No Warming” day
of civil disobedience at the U.S. Capitol, which was organized to connect the war for oil in Iraq to
the issue of global warming. PHOTO K. CYR.