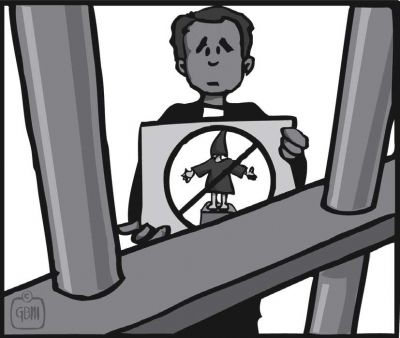 TUCSON, Ariz.—Two Catholic priests received five-month prison sentences Oct. 17 for illegally entering a U.S. Army base in southern Arizona to protest the military’s use of torture. During a Nov. 19, 2006 demonstration at Fort Huachuca, Ariz., home to the U.S. Army Intelligence Center, the Rev. Steve Kelly, 58, and the Rev. Louis Vitale, 75, entered the base to deliver a letter to Maj. Gen. Barbara Fast denouncing the use of torture, which they believe is being taught at the base. Kelly and Vitale had gathered with more than 100 people at the base in solidarity with the annual U.S. School of the Americas (SOA) protest at Fort Benning, Ga.

“We will keep trying to stop the teaching and practice of torture whether we are sent to jail or not,” Kelly said from the steps of the courthouse prior to his sentencing. “We have done our part for now. Now it is up to every woman and man of conscience to do their part to stop the injustice of torture.”
The SOA, renamed the Western Hemisphere Institute for Security Cooperation (WHINSEC ) in 2001, provides counter-insurgency training to officers from over a dozen Latin American militaries.

Scores of its graduates have been implicated in human rights abuses. SOA Watch began in 1990, following the Nov. 16, 1989, slayings in El Salvador of six Jesuit priests and two others by SOA graduates. The annual Fort Benning protest, which draws thousands of demonstrators to SOA/WHINSEC , is scheduled for Nov. 16-18. Demonstrators in Arizona are planning to hold a fourth annual solidarity demonstration Nov. 18, across the street from Fort Huachuca. For more, visit soaw.org.