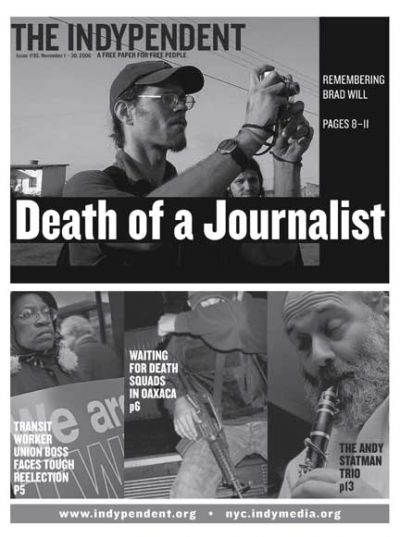 Brad Will was a New York-based independent journalist who was killed on Oct. 27, 2006, while covering a teacher-led social uprising in the impoverished southern Mexican state of Oaxaca.

Before his death, Will, a freight-hopping, guitar-playing activist, had spent years on the frontlines of countless movements from efforts to save squats and community gardens in the Lower East Side to engaging in “tree-sits” for weeks at a time high in the canopy of Oregon’s endangered old-growth forests.

Inspired by the militant, grassroots social justice movements that have flourished in recent years throughout Latin America, he first traveled to the region in 2002 and returned again and again with his video camera to chronicle and share in the struggles of the oppressed in various countries.

In February 2005, he was nearly killed when Brazilian police violently raided an encampment of 12,000 landless squatters who had occupied an abandoned industrial park. Twenty months later his luck finally ran out in Oaxaca. He was 36.