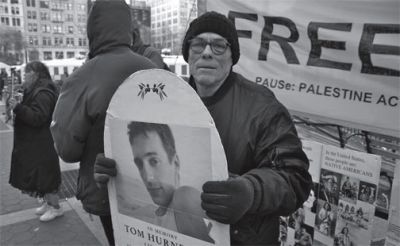 Every Saturday afternoon amid shoppers, skaters, tourists and passers-by at Union Square, a small group supporting Palestinian self-determination an even smaller pro-Israel group face off on a small patch of land across from Virgin Megastore on 14th Street.

“People see a point of view here that they don’t see anywhere else,” said Marcia Bernstein, 72, a retiree from Brooklyn, who participates in the vigil every week with her husband, Murray. The couple say they stand in support of the Palestinian people and in opposition to the illegal Israeli occupation of the land. “What is being done [to the Palestinians] is against all Jewish values,” said Bernstein, whose parents escaped the pogroms in Russia. “Jews have always stood for justice.”

The couple said they have witnessed several friendships break up over disagreements about the conflict. “Israel is held above sacrosanct,” Bernstein says.

Palestine Action at Union Square East (PAUSE), with no more than 30 members, has met every week since 2002 — even in winter. The group spontaneously organized after meeting at demonstrations by the peace network Women in Black.

Although passers-by often ignore the small protest, the gathering also sparks debate and provokes everything from thumbs up to insults and spitting. The pictures of Israeli atrocities and signs especially trigger angry reactions; cries of “assholes!” and “bullshit!” can be heard frequently.

A shopper passing by with a friend shouts: “There is no Palestine, you guys don’t know what you’re talking about.”

“The Palestinians have the right to resist occupation!” a member of PAUSE shouts back. “You speak like a fascist!” says the young man before taking off.

“There is so much Israeli propaganda in the U.S. press,” laments Ann Roos, a Brooklyn schoolteacher who was hit in the face during a PAUSE protest last year. However, she believes that more and more people are beginning to understand the issue. And even though some people yell at them, the protesters’ presence has provoked some interesting discussions.

A man in his mid-20s carrying a Filene’s Basement bag approaches the group and asks gently, “Was there ever a Palestinian state? I’m confused, can you explain?”

A young man on his bike stops by the group: “I’m Jewish, I support the state of Israel, even if I don’t like what they do,” he says.

One heckler, a motorcyclist, yells from the street, “Israel will rule the world because the Bible says so!” The PAUSE members laugh: “Now we need a good psychiatrist.”

A couple of feet away, two elderly men lead a small counter-protest, giving away unlabeled literature, such as a flier titled “Racism in the Islamic World,” and flyers for FLAME (Facts and Logic about the Middle East), a pro-Israel advocacy group. They say PAUSE has unnecessarily called the police 11 times, accusing the pro-Israel group of disruption. They also claim some of its members are openly anti-Semitic.

While the range of opinions varies within PAUSE, Bernstein dismisses claims of anti- Semitism. “It’s ridiculous,” she said, “Israel is a state, it’s led by a militaristic right-wing government, and you can criticize it.”

Caught between the two groups in the middle of a heated argument, a man and a woman reading flyers came together: “Israel, Burma, Africa, it goes on,” says the man, shaking his head. “I agree that Israel has a strong lobby … but so does China,” says the woman, “the world is spiraling.”

NEITHER RAIN NOR SNOW: Bernie McFall of Palestine Action at Union Square East has been participating in the group’s
weekly vigil for more than two years. PHOTO: K. CYR