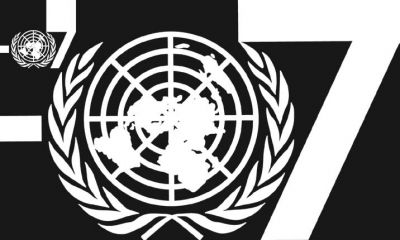 UNITED NATIONS, N.Y.—On Jan. 2, I made the rounds here. I stopped by the office of the spokesman for the secretary-general, passed the tapestry replica of Picasso’s “Guernica,” and went into the delegates’ lounge. There were few people about. No meetings were scheduled.

I reflected. From the perspective of another year as a U.N. correspondent, it was discouraging that the United Nations had achieved nothing during 2007.

With a new Secretary-General, Ban Ki-moon of South Korea, in charge, the United Nations simply went through the motions of taking up critical issues and desperate situations.

As correspondents here observed, when Ban spoke, he emitted clichés. Nothing noteworthy. Nothing informative, interesting, or inspiring. Of his first year in office, he said, “I have not sat still … I have been on the go … I flew 125,000 miles during 57 official visits … in 39 countries.”

Frequently, when he got back, Ban stopped off at the White House.

The United States again demonstrated its unfriendliness to the United Nations It ran up its U.N. arrears as of Oct. 31 for the regular budget, international tribunals, peacekeeping operations, and the renovation of U.N. headquarters to $2.3 billion, more than twice the previous year. Meanwhile, the Bush administration projected a 2008 “defense” budget of $802.9 billion.

What happened in Darfur, Sudan, where in 2007 up to an estimated 255,000 villagers had been killed and 2.2 million displaced since 2003? A joint U.N.-African Union force had been scheduled for deployment early in 2008. However, the force had fallen short in the number of troops provided, and commitments for 24 helicopters had not been met. Without the helicopters, the force would lack critical mobility and resupply capacity.

On another war front, in a gesture to Iraqi refugees, the U.N. Office of the High Commissioner for Refugees on Dec. 14 began distributing ATM cards in amounts of $100 to $200 to 7,000 families. More than 4.5 million Iraqis are currently uprooted — 2.4 million inside Iraq, 2.2 million outside, most in Syria and Jordan. The 7,000 will also receive food aid. At this rate, it seemed to me, the United Nations was headed for entombment.

Donald Paneth has covered the U.N. at intervals since December 1945.