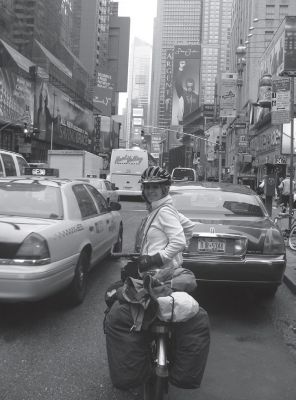 One young Iranian couple, determined not to leave their country’s public relations to others, is bicycling around the globe to spread a message of peace and environmental conservation.

Somayeh Yousefi, 28, and Jafar Edrisi, 29, met nine years ago atop Mount Damavand, the highest peak in Iran, and married four years later. After selling their car and furniture for $12,000 last April, they set off to educate the world about Iran and to plant trees across the globe. They cycled through Turkey, crossed Europe and then skipped across the Atlantic Ocean before arriving in New York City in November. This is their first trip outside of Iran.

“We don’t want to judge other countries by the bad stuff happening on the news,” said Yousefi, who was Iran’s female rock-climbing champion for six years. “We wish to convey a message of peace and friendship from the people of Iran to other countries,” she said.

The couple plans to cover a total of 12,500 miles during their two-year odyssey. Living on an average of $10 a day, they haul the basics — tent, cookware and clothing — from city to city. So far, they have planted 14 trees and screened a video about Iran’s natural wonders in communities all along their route.

“People are very confused about Iran,” Yousefi said. “They think Iranian people are terrorists or aggressive or that we ride camels. Iran is a rich country, but no one knows about it. So we think it is our duty to show our culture to people.”

Face-to-face contact with people in Europe and Canada countered many of the couple’s own misconceptions of different cultures. But they said violent images from Hollywood movies and the media still made them wary of traveling through the United States.

But the couple has been surprised by the Americans they have met since crossing the Canadian border on Nov. 19. In Vermont, a stranger invited them to camp out in her home that was under construction. They met former U.N. weapons inspector Scott Ritter in Albany. Ritter encouraged the couple to educate Americans about Iran, they said. In Poughkeepsie, New York, a fellow cyclist drove them to their friend’s house when it was too dark to bike.

These memories are recorded on a handpainted banner they plan to carry from the United States to Japan, Korea, China, Nepal, Pakistan and Iran, the final leg of their journey.

“After my wedding ring, this is the most precious thing I have in my life,” said Yousefi, holding up the banner covered in signatures.