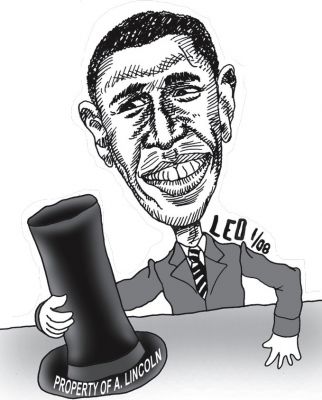 I need to hope. Exhausted by the left’s fatalism, I sift the euphoria around Barack Obama for something real. Here is a Black man walking in Abraham Lincoln’s footsteps daring us to free ourselves from the racism that slavery left behind.

His success is tempting. He’s converted so many whites already, but having been raised around Christians, I know “conversion” is often willed blindness. It grants wonder without insight as we shut our eyes and try to find the future in the dark by sheer force of will. But inside that willed blindness is who we still are.

And “conversion” is what he inspires. But how can we “hope” after each attempt to integrate America cost so much blood. Leaders shot. People jailed. Decades of benign neglect as schools decayed, Black and Latino men packed in prison. Now the very white majority that stood by is eager to claim a Black man as their symbol.

Is it because America stands embarrassed before the world? We invaded Iraq and found no WMDs, no connection to 9/11. Now we must clean ourselves. And here comes an ambitious buppie who’ll let us wipe the blood off our hands on his skin. Is it because whites see beyond his skin color to the content of his character? Or does his skin reflect the wished-for content of their own character, to see themselves as a people good enough to elect a Black president. So I pull back from “hoping,” because the euphoria has the same self-congratulation that surrounded Colin Powell’s possible candidacy. “He’ll prove we’re not racist,” the unconscious dialogue went, “If only all Blacks could be like him, articulate, wellmannered, patient and forgiving.”

Obama is a symbol of America’s displaced guilt and desired innocence. It drives his narrative, as it has nearly every presidential candidate’s. Reagan was the cowboy riding over the hills to bring morning to America; the first Bush’s “thousand points of light” were missiles raining on Iraq; Clinton was a sexual swashbuckler who opened Wall Street purses; and this Bush is also a cowboy, plastering Bin Laden “Wanted Dead or Alive” posters in the Third World frontier.

But he doesn’t bring us hope; he takes our hope to the last door of power. African-Americans have tried for the White House like strengthening tides; first Shirley Chisolm in ’72 then Jesse Jackson in ’84 and ’88. Each edged closer but never inside. If Obama wins and isn’t shot there will be a sigh of relief because we will once again have chosen feel-good wholesomeness over the hard work of healing.

It’s why Sen. Edwards’s clear-eyed “Two Americas” campaign struggles. We want a seamless America rather than to know how divided we are. The divisions cause anxiety, which is why so many respond so eagerly to Obama’s patriotic illusion. Edwards’s narrative is viable when the system is broken and it isn’t, not totally. So we “hope” And Obama will bring some relief as the unspoken apology for slavery. But will he bring relief to the slaves of today? We still have them, because we still want coerced labor. In the United States there are 11 million illegal immigrants. John Bowe, author of Nobodies, writes of the 850,000 people who leave the Global South every year for our borders. They die in deserts, fall off rafts in the ocean and suffocate in cargo holds. They follow the same North Star that African-Americans did generations ago, but we don’t see Latino day workers as the new slaves.

But we will. By 2050 America will no longer be a majority-white nation. Immigrants are not welcomed, but are seen as strangers. How long before nativist anxiety turns into pogroms? How long can a house divided against itself stand?

Obama styles himself as Lincoln’s heir. Many on the left snicker, but there is danger in not seeing the significance of symbolic change. Symbolism is real.

To dismiss Obama is to miss a chance to nudge America to the truth that we are fast becoming a true rainbow. His campaign is not the solution, but his story is more important than he is. Should he enter the White House, we have to wedge our voices in the instant between America’s acknowledgment of its debt and its assumption that it’s been paid, and call for real change, knowing people want it desperately. Obama may stand at the podium, calling on the “better angels of our nature,” but only we can let them fly.