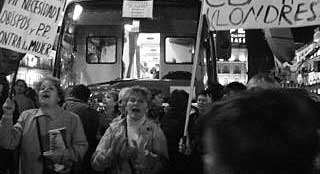 MADRID—On Dec. 30, Archbishop Antonio María Rouco performed two miracles. On a bright winter’s day, Madrid’s cardinal convened a million people in Plaza Colón to defend the Christian family. They stood in a sea of colored balloons, with children and babies in tow, as he delivered the second: Pope Benedict XVI live by video link-up from the Vatican.

Then, in between songs and prayers, Spain’s bishops lined up to attack the center-left Socialist government of Prime Minister José Luis Rodriguez Zapatero. They spoke of a “great social menace” created by a secular administration and its support for abortion as well as gay marriage and “express divorce.”

Although abortion was legalized 22 years ago, in 2008 abortion clinics report they are under unprecedented attack from “fundamentalist Catholics in league with the far right.” It appears that a resurgence of conservatism within the Catholic Church has boosted the confidence of anti-abortion activists, who are now pressing home their advantage.

One thing all sides can agree on is that the current law is a mess. Spain decriminalized abortion in 1985, 10 years after the death of the longtime fascist dictator Francisco Franco. Abortion is only permitted in certain cases — up to 12 weeks for women who have been raped or up to 22 weeks if a fetus is malformed.

However there is no time limit if there is a risk to the mother’s physical or mental health. This clause provides grounds for 97 percent of Spain’s abortions. Public health bodies are wary of the law’s ambiguity and avoid performing abortions, which are left to private clinics.

Late last year clinics were rocked by scandal. Raids in Barcelona resulted in the arrests of Dr. Carlos Morín and staff, who were allegedly filmed offering to perform an abortion for a woman who was seven months pregnant.

Justa Montero, member of the Feminist Assembly, argues that the anti-abortion lobby then exploited Morin’s arrest. “The events in Barcelona — although we have yet to know the outcome of the cases — have displaced the debate to the far right,” she said.

The Association of Private Clinics (ACAI) has accused the government of doing nothing to protect patients and the clinics, which have faced an upsurge in angry protests and “systematic harassment” by local government inspectors. Clinics have been vandalized and medical staff attacked by pro-life protesters.

Cities like Madrid are particularly vulnerable, as they are governed by the conservative opposition, which supports the Church’s position on abortion. Two Madrid clinics have been closed down and another is under investigation after anti-choice pressure groups lodged accusations of illegal abortions.

“NOT A SINGLE STEP BACK”

Since Zapatero was elected in 2004, his opponents in the Catholic Church have aggressively re-politicized religion. Anew collection of conservative organizations has gained momentum, the strongest ultra-right group being the “Kikos”, named after their founder Kiko Argüello, who enjoy excellent relations with the Vatican.

The Socialist government is angry with the outspoken bishops. Arecent Church pronouncement, which warned voters against supporting parties that promote abortion and gay marriage, prompted a bitter accusation that the Vatican is seeking to sway the vote. Zapatero announced “not a single step back” on progressive laws, but quietly dropped a 2004 election promise to liberal¬ize abortion laws.

However, ACAI is also mobilizing. Aweek-long strike in January was followed by a “self-incrimination” campaign in which 5,000 people signed forms admitting to illegal “voluntary” abortions (either directly or in collusion). The clinics are pushing for a law allowing voluntary abortions within the first 12 weeks of pregnancy, in line with the rest of Europe.

On Jan. 23, some 50 women’s organizations convened a noisy rally to defend abortion in Madrid’s Puerta de Sol. The 3,000 demonstrators were in no doubt over who was behind the assault on reproductive rights. Barbed chants included ones like “The bishops need to get a sex life … with adults.”

“We won all these rights,” said Conny Rodriguez, a 65-year-old retired bingo hall attendant. “And now the bishops want to change the government — they are trying to take us back to the Franco era when priests, doctors and the mayors ruled.

“But,” she added confidently, “we are not going to let them.”